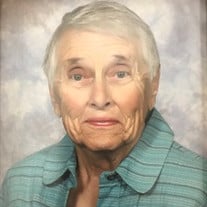 Anne Evans Carpenter Goodell, age 90, passed away quietly in her sleep from Alzheimer’s under hospice care at Ashley Glen Assisted Living Memory Care in Peachtree City on August 21, 2020. Daughter of the late James Kirkpatrick Carpenter and Gladys Evans Carpenter, she was born August 24, 1929 in Rome, Georgia and grew up on the family farm in Kirk’s Grove, Alabama. She attended high school at Montreat in North Carolina and earned her Batchelor of Arts degree from Auburn University in 1950, where she was a member of Theta Upsilon sorority. It was there she met her future husband, Dr. Charles Bolman Goodell. They married on June 9, 1951 and moved to Newnan to set up his veterinary practice in 1954. She helped him run his practice until he died in 1993. She was a life-long music lover ad played the violin from age 12. She played violin in the Rome Orchestra as a teenager and in the Centre Strings orchestra in Newnan. She was continually active at St. Paul’s Episcopal Church and served on the vestry, altar guild and Daughters of the King and actively participated in a variety of community volunteer endeavors associated with the church. She volunteered for many years with Christian City Hospice, Newnan Hospital Auxiliary, Meals on Wheels, and the Coweta 4H Horse and Pony Club, where she put on many horse shows. She was a “Dye Hard” Auburn fan all her adult life and attended all of the home games from 1971 through 2016. Mrs. Goodell was preceded in death by her husband of 42 years, Dr. Charles Bolman Goodell. She is survived by her five children, Karen Anne Webb, James Kirkpatrick Goodell, Charles Bolman Goodell, Jr. William DeForest Goodell (Kriss Causey) and Katherine (Dean) Bell; two grandsons, Charles Warren (Stephanie) Webb and Allyn Alexander Bell, and one great-grandson, Greisyn Allyn Dean Bell. The family will honor her in a private service to be held at the graveside at Forest Lawn Memorial Park. Those who may wish to honor her life with a memorial gift, might consider her love for her church, St. Paul’s Episcopal Church 576 Roscoe Road Newnan GA 30263. Online condolences may be expressed at www.mckoon.com. McKoon Funeral Home and Crematory 770-253-4580.

The family of Anne C. Goodell created this Life Tributes page to make it easy to share your memories.

Send flowers to the Goodell family.