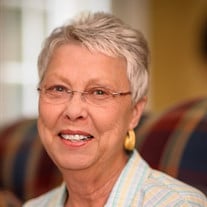 The poet Claudia Grandi penned the words “If I had a single flower for every time I think of you, I could walk forever in my garden”. That would be a lovely characterization of the sweet and tender nature of Barbara Jane Baxley Parker. Jane was born on October 1, 1938 in Atlanta, Georgia. She was the only child born of the marriage of the late Mark A. and Ethel Smith Baxley. She had the unique distinction of being led to accept Christ at The Billy Graham Crusade that was in Atlanta at the old Ponce de Leon Ballpark in 1960. Her conversion and acceptance of Christ’s teachings would be the foundation for every day of her life from that day on. Jane adhered to the principle that her greatest satisfaction in life was providing a loving and nurturing home for her family. That included her creative skills as a cook. There was always family time in the evenings as she gathered her husband and four sons for the evening meal. Being a stay-at-home mom might have meant that there were some budget controls, but at the Bank of Jane, money was not the most important commodity, as she shared the wealth of her time, her commonsense life lessons and her attendance at the sporting events of her sons. A Saturday morning hair appointment might necessitate dragging one of more boys in tow, but none complained because there was a comic bookstore nearby and lunch would be at Woolworth’s counter, or sometimes even splurging a little and going to The Magnolia Room at Rich’s. Summers were filled with beach excursions to Pleasant Hill Lake. Fun was never in short supply. Going to church on Sunday was entrenched in her faith set. Sometimes there might have been a little reticence on behalf of four boys who would love to sleep in on the weekend. They would usually cave in early because church attendance was not up for discussion. The boys came to appreciate that quality in her because they knew that she prayed every day of her life for wisdom for herself as she paved the way for her boys to become good and honorable men. In her moments not devoted to her boys and husband, Jane enjoyed employing her great gardening skills. She would construct a greenhouse after moving to Newnan to house her vast collection of orchids. Her plants, like everything else in her life, were cared for with consummate skill. Life changed dramatically for Jane as she suffered the loss of her beloved husband Thomas Carnes Parker. They had been married since 1958 and together they shared a lifelong love story. At the time of her death, she had been battling cancer for nine years. In His infinite and amazing grace, the God she loved and served her whole life, reached down and she again heeded His call and received her life eternal beside her beloved Thomas and other family. The Bible speaks of a woman’s children calling her blessed. And she surely blessed her sons Thomas Mark Parker and his wife Tanya, Michael Parker and his wife Melinda, Stephen Parker, Matthew Parker and his wife Holli. Jane reveled in her role as a grandmother to Courtney Tiner and her husband Luke. Their daughter Elliana Tiner is the only great grandchild. The other grandchildren include Katherine Parker, Christopher Parker, Delaney Parker Janes and her husband Matthew, Elizabeth “Libby” Parker and Russell Parker. The life of Jane Parker will be recalled by her family as they gather at Forest Lawn Memorial Park as she is placed beside her dear Thomas. Proverbs 31:25, “She speaks with wisdom and faithful instruction is on her tongue”. To God be the glory, till we all meet again at Jesus’ feet. A private family service will be held. McKoon Funeral Home & Crematory (770) 253-4580.

The poet Claudia Grandi penned the words &#8220;If I had a single flower for every time I think of you, I could walk forever in my garden&#8221;. That would be a lovely characterization of the sweet and tender nature of Barbara Jane Baxley... View Obituary & Service Information

The family of Barbara Jane Baxley Parker created this Life Tributes page to make it easy to share your memories.

The poet Claudia Grandi penned the words “If I had a single flower...

Send flowers to the Parker family.