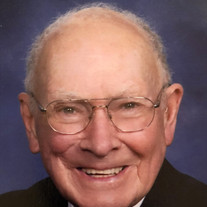 Billy Carl Wallace, formally of Stillwater, OK., and a "Ramblin' Wreck from Georgia Tech and a helluva engineer," passed away in Newnan, GA., on Sunday, May 1, 2022. He was 96 years old. His given name is indeed Billy, though his Uncle Orland, or "Unk" as he was affectionally known, would on occasion call him William. Billy is survived by his four children, Carol (Rich) Johnstone of Walnut Creek, CA., Debbie Blossom of Oklahoma City, OK., Wendy (Paul) Kooser of Sarasota, FL., and Brian (Carrie) Wallace of Newnan, GA., five grandchildren, three great-grandchildren, his sister Bettie Clark of Houston, TX., sister-in-law Helen Wallace of Tucker, GA. and 12 nieces and nephews. His wife of 73 years, JoAnn Wallace, preceded him in death, as did his parents Carl Wallace and Ona Wallace Price, his brother Jim Wallace, and his sister Mary Alice Humphrey. The oldest of four children, Billy was born at home in Magnolia, AR., on April 25, 1926. Growing up he delivered newspapers, was a service station attendant (yes, we used to have those), clerked at a local hotel, and held other jobs. Because of special rules in place during WWII, he was able to begin his college experience at Magnolia A&M College (now known as Southern Arkansas University) in what would have been his senior year of high school. After one semester there he enrolled at the Georgia Institute of Technology in Atlanta where he was a member of the Delta Tau Delta fraternity as well as the electrical engineering honorary society, Eta Kappa Nu. He graduated in 1946. During his time at GA. Tech he was part of the V-12 College Training Program which enabled him to graduate with an officer commission in the Navy. He had the good fortune to meet JoAnn Lewis on a blind date while in school. They married at the chapel at Emory University in Atlanta on April 14, 1947. For the next 22 years he traveled across the country and the world as a Naval officer, rising to the rank of Commander. His overseas assignments included time in Saipan (where he and his family lived in a Quonset hut), Okinawa, the Philippines and the Panama Canal Zone. He and his wife and family moved across the country six times during these years. While in the Navy he continued his education, receiving bachelor's and master's degrees in Civil Engineering from Rensselaer Polytechnic Institute in Troy, NY. He retired from the Navy in 1969 and moved to Stillwater, OK., to begin work as an engineer in the Physical Plant at Oklahoma State University (OSU) where he soon become assistant director. He worked at OSU through the end of 1987 when he retired. While in Stillwater, Billy and JoAnn were members of the First Baptist Church where they taught second and third grade Sunday School together for several years. Billy joined the Stillwater Rotary Club in 1972 and remained an active member for decades, became a Paul Harris Fellow and actively contributed to honor others with that designation, and was honored by the club for making wooden Christmas toys for children. After 48 years in Stillwater, he and JoAnn moved to Newnan, GA., in 2017 to live close to their son and his family. Billy loved the outdoors and supported organizations that advocated for national parks, wilderness areas, and clean water and air. He also loved music, art and was deeply appreciative of the talents of others and the gifts they brought to the world. Billy also enjoyed wood working, photography and golf (he played well into his 80s), supported numerous organizations with financial gifts, and was also known to write his elected officials and the occasional letter to the editor. He loved his wife, children, grandchildren, and great-grandchildren. If wishing to honor him, friends are encouraged to contact the Oklahoma State University Foundation and make a donation in his memory to the Friends of Music program. Condolences may be expressed to the family online at www.mckoon.com. McKoon Funeral Home & Crematory 770-253-4580

Billy Carl Wallace, formally of Stillwater, OK., and a "Ramblin' Wreck from Georgia Tech and a helluva engineer," passed away in Newnan, GA., on Sunday, May 1, 2022. He was 96 years old. His given name is indeed Billy, though his Uncle Orland,... View Obituary & Service Information

The family of Billy Carl Wallace created this Life Tributes page to make it easy to share your memories.

Send flowers to the Wallace family.