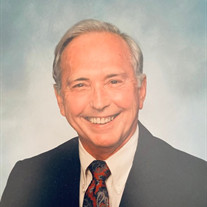 Mr. Cannon “Nick” Smith Nichols, 90, of Newnan, passed away, surrounded by his family, on January 22, 2021 at Wesley Woods of Newnan. Nick was born on June 16, 1930 in Newberry, SC to the late Thomas Smith Nichols and Elsie Cannon Nichols. Nick grew up in Newberry, SC. He was a 1947 graduate of Newberry High School. Nick married Tena Price Nichols in 1950. Nick graduated from the Clemson Agricultural College in 1952 with a Bachelor of Science in Textile Engineering. Nick served his country as a 1st Lieutenant in the U.S. Army and was a veteran of the Korean War. He worked in the textile industry for 43 years. Nick retired as Director of New Products from Playtex International. He was a longtime member of Newnan First United Methodist Church. He and Tena recently celebrated 71 years of marriage. Nick loved his wife, children, grandchildren, and great grandson. He and Tena were avid golfers who thoroughly enjoyed their years at the Newnan Country Club. Nick volunteered at the Newnan First United Methodist Church. Nick never met a stranger. He was a great conversationalist who was known for his sense of humor, quick wit, and easy smile. He had many friends who appreciated his loyalty, honesty, and humor. Nick could fix anything and was especially talented in furniture restoration. He and Tena enjoyed traveling to St. Simons Island, GA and to visit family. A private graveside service was held at Forest Lawn Memorial Park at 10:00 am on January 24, 2021 with Rev. Sharon Edgar officiating. With military honors presented by the U.S. Army. Rather than flowers, the family requests memorial contributions to Wesley Woods of Newnan Residents Association at 2280 US Highway 29, Newnan GA 30265. The donation should be designated to the Employee Appreciation Fund/Plaza Employees. Condolences can be expressed online at www.mckoon.com. Survivors include his wife, Tena Price Nichols; brother, Bobby Ray Nichols; daughter, Paige (Steve) Stripling; son, Alan (Denise) Nichols; grandchildren, Katie (Sam) Hawthorne, and Josh Nichols; great grandson, Noah Hawthorne. McKoon Funeral Home & Crematory (770) 253-4580.

The family of Cannon "Nick" Smith Nichols created this Life Tributes page to make it easy to share your memories.

Send flowers to the Nichols family.