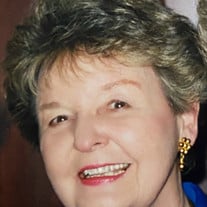 Ann was born at Emory Hospital in Atlanta, GA on January 10, 1928 to Julian Anthony Whatley, Sr. and Carolyn Whatley, both who proceeded her in death. She passed away peacefully and surrounded by her family in the afternoon of June 27, 2021. She was excited to dance with Jesus in heaven as well as to be reunited with her husband, Charles Lewis Ledsinger. In addition to her parents and Lewis, she was proceeded in death by her sister, Elizabeth Osgood (Richard Osgood). In her younger years, she was a debutante and attended NAPS School for Girls, which later became Westminster. She also attended Stetson University. She met the love of her life, Lewis Ledsinger, while attending The University of Georgia (UGA). The two met in biology class at UGA where they became lab partners, shared a telescope, and later fell in love. They married on June 6, 1950. Shortly after, they settled in Atlanta, later moving to Roswell to raise their three children. She was an active member of Roswell Presbyterian Church and later Mount Paran Church of God, in Atlanta, GA. Lewis and Ann's retirement took them to Cashiers, NC, where they built their dream log cabin home and helped start Pine Grove Worship Center with the support of Mount Paran Church of God and Pastor Mike Atkins. In 2005, Ann moved to Newnan to be close to her daughter, Judy, and became active in her community. The last few years, she resided at Wesley Woods of Newnan. During her time at Wesley Woods, Ann became an avid card player with her group of friends. Ann loved God, church, her family and her many friends. Through her smile, warm personality and unwavering faith, she brought many people to the Lord, which was her life's purpose. A celebration of her life will be held at McKoon Funeral Home on Saturday, July 31 at 11:00 am in the chapel with Pastor Mike Atkins and Chaplain Sharon Edgar officiating. In lieu of flowers, memorial contributions may be made to Southwest Christian Care Hospice, 7225 Lester Rd, Union City, GA. 30296. The family would like to express our deepest appreciation to Wesley Woods and Southwest Christian Hospice for the love and care they gave Ann. She is survived by her brother, Julian Anthony Whatley, III (Linda Whatley), Carolyn Ledsinger Scharnberger (Larry Scharnberger) of Cape Coral, FL., Charles Lewis Ledsinger (Gerry Ledsinger) of Cumming GA, and Julia Ledsinger Dixon (Bill Dixon) of Newnan, GA. Also, her three grandchildren Kristina Howell Kidd (Brandon Kidd), Elizabeth Ledsinger Napolitano (Chris Napolitano) and W. Sterling Dixon, III and four great-grandchildren, Isaac Kidd, Bishop Kidd, Collin Napolitano and Nolan Napolitano, along with her many nieces and nephews. "I have fought the good fight, I have finished the race, I have kept the faith." II Timothy 4:7 Condolneces may be expressed to the family online at www.mckoon.com. McKoon Funeral Home & Crematory 770-253-4580

Ann was born at Emory Hospital in Atlanta, GA on January 10, 1928 to Julian Anthony Whatley, Sr. and Carolyn Whatley, both who proceeded her in death. She passed away peacefully and surrounded by her family in the afternoon of June 27, 2021.... View Obituary & Service Information

The family of Carolyn "Ann" Antoinette Ledsinger created this Life Tributes page to make it easy to share your memories.

Ann was born at Emory Hospital in Atlanta, GA on January 10,...

Send flowers to the Ledsinger family.