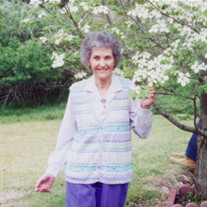 Carrie Lee Brown, age 95, passed away peacefully on Tuesday, January 12, 2021 at Piedmont Newnan Hospital with family by her side. She was born in Sargent, GA on June 20, 1925 to the late Marvin Holloway and Sally Ward Holloway. Along with her parents, Carrie Lee is preceded in death by her husband, Everett Brown; children, Patricia Brown Eidson, Lynn Brown, Karen Brown Payton, Libby Brown Youngblood and siblings, Hazel Holloway Hopgood and Johnny Holloway. She is survived by grandchildren, Cindy Eidson and her husband Matt Smith, Jennifer Brown Goolsby and her husband Rod, Kyle Nelms and his wife Jessie, Taylor Justin Brown, Kane Payton and his wife Brooke; great grandchildren, Nick Reasor, Nate Reasor, Brittany Payton Mui (Nathan), Johnny Greene, Everett Eidson-Smith, Jake Brown, Levi Brown, Joshua Payton, Jr. and Delilah Payton. She is also survived by son-in-laws, Marcus Eidson and Carl Payton. Carrie Lee loved her home in Arnco and the people who lived there. She would call daily to check on her friends, to make sure they were okay or just to talk and share some laughs. She wasn’t just a neighbor. She was a best friend, and some would even say she was a “mom” to them. Grandma loved to laugh, make jokes, and reassure you “I’m just kidding.” She loved Coca-Cola and homemade snow ice cream. She was strong, independent, and (some of the grandkids would say) stubborn, but she took care of her own self and valued her independence A LOT. She stayed in her house by herself right up until the end. The family will miss her smiles, her calls at birthdays, and her overall joy. Most folks wouldn’t be able to bury all four of her kids and live to tell about it, but she continued to smile. She wouldn’t even tell you when she was sick. We admired her strength and will miss her fun-loving spirit dearly. The visitation is Friday, January 15, 2021 from 1:00 PM until 2:00 PM at McKoon Funeral Home, 38 Jackson Street, in Newnan. The family will have a private graveside service with Craig Jackson officiating. In lieu of flowers the family asks that memorial contributions be made in Carrie Lee's name to Arnco Baptist Church, 81 Arnco 3rd Street, Newnan, GA 30236. Condolences may be expressed to the family online at www.mckoon.com. McKoon Funeral Home & Crematory 770-253-4580

Carrie Lee Brown, age 95, passed away peacefully on Tuesday, January 12, 2021 at Piedmont Newnan Hospital with family by her side. She was born in Sargent, GA on June 20, 1925 to the late Marvin Holloway and Sally Ward Holloway. Along with... View Obituary & Service Information

The family of Carrie Lee Brown created this Life Tributes page to make it easy to share your memories.