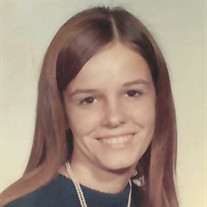 Cathryn "Diane" Jackson 14 February 1953 - 15 March 2022 Cathryn "Diane" Jackson passed away peacefully at her home in Moreland, Georgia on 15 March 2022; she was 69 years old. Diane was born on 14 February 1953 in Tallahassee, Florida. After receiving her General Education Development from Titusville High School, she initially worked as a Cashier for Publix in Titusville, Florida and as a Seamstress at Vanity Fair in Milton, Florida before retiring as a Loan Associate at Coweta Federal Credit Union in Newnan, Georgia. Diane was a caring, dedicated and loving Daughter, Sister, Wife, Mother, Grandmother and Great Grandmother who would do anything for her family and enjoyed quilting, reading and spending time with her feline friends. She was preceded in death by her Father and Mother (Billy Ray Allred and Peggy Dale Allred) and (1) brother, Michael Ray Allred; She is survived by her loving Husband of 34 years, David Warren Jackson; (1) Sister, Cynthia (Craig) Tyree of Mims, Florida and (1) Brother, Mark (Lynn) Allred of Arley, Alabama; a Son, Robert (Tammy) Caris of Mobile, Alabama and a Daughter, Stacie (Cody) Vickery of Senoia, Georgia; (9) Grandchildren, Brandon, Taylor, Haley, Lauren, Courtnie, Magan, Emily, Juliette and Piper; and (7) Great Grandchildren. Services will be held at 6:00 p.m. on 25 March 2022 at McKoon Funeral Home in Newnan, Georgia; the celebration of life will be held from 4:00 p.m. until 8:00 p.m. on 26 March 2020 at 129 Bear Creek Road (Harris Residence) in Moreland, Georgia. In lieu of flowers, memorial contributions may be made to the National Multiple Sclerosis Society at www.nationalmssociety.org Condolences may be expressed online at www.mckoon.com McKoon Funeral Home & Crematory (770) 253-4580

The family of Cathryn Diane Jackson created this Life Tributes page to make it easy to share your memories.