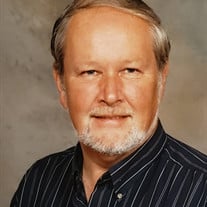 Charles Lambert Kabrich (Big Charlie), 75 of Sharpsburg, passed away Friday, September 17, 2021 at Piedmont Fayette Hospital. Charlie was born September 7, 1946 in Ahoskie, North Carolina to the late Grover Vernon Kabrich and Hannah Winbourne Kabrich. In addition to his parents, he was preceded in death by daughter, Lora Marie Romo. Charlie had a long career with General Motors where he was a tool & die maker and shop chairman with the Union of Auto workers (UAW local 663). He was proud of his accomplishments and service as union representative with the UAW where he retired in 1999. Charlie never lost his passion for bowling, was an active member in the community, and was the president of the lake association for many years where he lives. He devoted his life to helping others and making good memories for others. The memorial service is 6:00 pm Thursday, September 23, 2021 in the chapel of McKoon Funeral Home with Pastor Terry Calhoun officiating. In lieu of flowers, memorial contributions may be made to the Newnan Coweta Humane Society, 60 Hwy 29 N, Newnan, GA 30263 or www.nchsrescue.org/donate Condolences may be expressed online at www.mckoon.com Survivors include wife, Edith Channell Kabrich; children, Charlie A. Kabrich (Corine Comeaux), Carolyn Lynn Rowlett, James Alan Kabrich; grandchildren, Lila Rose Hickey, Bram Douglas Hickey, Charles Marshal Kabrich (Chikako Kabrich), Joseph Arlis Kabrich, Jesse Johnson, and Christian Antonio Morales; siblings, Nellie Jean Newman (Bob), Kenneth Floyd Kabrich (Rebecca Crump); brother-in-law, Craig Channell; nieces, nephews, and cousins and many friends in this community and back in Indiana where he served as the Shop Chairman. McKoon Funeral Home & Crematory (770) 253-4580

The family of Charles Lambert Kabrich created this Life Tributes page to make it easy to share your memories.

Send flowers to the Kabrich family.