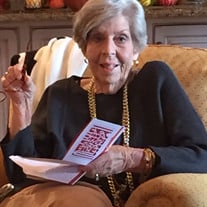 Mrs. Charlsie Barron Farmer passed away peacefully on Saturday, January 16th, 2021. Born on October 24th, 1930, Charlsie was 90 years old and lived a long and happy life. A beloved wife, mother of four, grandmother to nine, great grandmother to four, one of six sisters, and a friend to many – her laughter, sense of humor, and knack for telling a good story will be missed by many but forgotten by none. Daughter to Charles Lee “Bud” and Gussie Boynton Barron, Charlsie was born and raised in Newnan, GA. She was the fifth of Charles’ and Gussie’s six daughters, and remained close with her sisters Ruth, Evelyn, Laura, Dee, and Katchie throughout her life. Her childhood home on W. Washington Street was a short walk from downtown. The close-knit communities in Newnan and at Central Baptist Church are where Charlsie developed her deep, Southern values, as well as the love of her life, Hugh Arnold Farmer Jr. From the sidelines as a cheerleader at Newnan High School watching him play football, she would become his biggest cheerleader in life. While she ventured to Mercer University after graduation, and he to Auburn University, it didn’t take them long to realize they were meant to be together. On October 20th, 1951 Hugh and Charlsie married and they began their family with their son, Hugh A. Farmer III, being born in 1953. Shortly thereafter Hugh Jr. was drafted to serve in in the US Army. After a short move to Oklahoma, where her husband was stationed, Charlsie moved back home to Newnan with her son while Hugh Jr. served in the occupational forces in Germany. Upon his return to the States, Charlsie and Hugh Jr. planted roots in their hometown before having their three other children, Frank Miller Farmer, Zoe Farmer Beavers, and Nan Farmer Bridges. Charlsie and Hugh’s love for one another was absolute. They embraced one another’s flaws and celebrated each other’s character. They were best friends who enjoyed the simple pleasures of laughing together often, tending to their home of 57 years at 14 Atkinson Street, and spending time with their family. Their devotion to one another through the years was unwavering, no matter the challenges they faced through life, they faced them together. Her passions in life were the beauty and history she found in the world around her. Charlsie had a keen sense of style and loved to seek out and find homes for the wonderful things she found, whether it be flowers picked on a walk or curious items found antiquing. She was known for her decorative eye, and she pursued it with friends through the design of their homes, as well as through The Jefferson House, a business she was part of for many years. Charlsie’s greatest joy, however, was her family. She was a devoted mother to her four children, encouraging them to pursue their passions and constantly worrying about them when they did. Her patience and support never failed, and her talent as a cook never disappointed. She was also a devoted grandmother to her nine grandchildren who lovingly referred to her as “Bobo”. Each of them recalls her as a second mother: keeping them for countless weekends and afternoons after school; attending the majority of their sporting events; and never missing one of life’s milestones. Charlsie was fortunate to witness the lives of her children and grandchildren bloom into a third generation of four great grandchildren. Charlsie’s family and friends love and remember her for her humor, laughter, imagination, creativity, stories, selflessness, and beauty. Her life was long, full of joy, and her surviving family is grateful. Her husband, preceding her in death, lovingly holds her after ten long years apart. A private ceremony will be held at Central Baptist Church in Newnan, GA at 1:00 PM on Tuesday January 19th, immediately followed by the burial at 2:00 PM , which is open to all who wish to pay their respects, at Oak Hill Cemetary. For additional information, please contact McKoon Funeral Home at 770-253-4580. Survived by: Hugh A. & Carol M. Farmer III and their two sons Hugh A. Farmer IV and Neal H. Farmer; Frank Miller & Melody Farmer and their two sons and daughters in-law Frank M. & Samantha Farmer and Charles C. & Heather Farmer; Randy & Zoe Farmer Beavers Sr. and their two sons and daughters in law Randy & Ashley Beavers and Will & Beth Beavers; Joe H. & Nan Farmer Bridges Jr and their two children Joe H. “Bo” Bridges III and Charlsie Zoe Bridges; Three great grandchildren Charlsie Rowe Beavers, Frank Miller Farmer III, and Hanson Charles Farmer. Preceded in death by: Husband Hugh A. Farmer Jr., granddaughter Cornelia M. Farmer, and great grandson Randolph Owen “Rowe” Beavers. A private ceremony will be held at Central Baptist Church in Newnan, GA at 1:00 PM on Tuesday January 19th, followed by a burial at 2:00 PM which is open to all who wish to pay their respects, at Oak Hill Cemetery. Condolences may be expressed to the family online at www.mckoon.com. McKoon Funeral Home & Crematory 770-253-4580

The family of Charlsie Barron Farmer created this Life Tributes page to make it easy to share your memories.

Send flowers to the Farmer family.