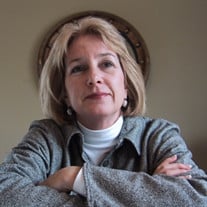 Mrs. Christine Ann Seaman, 71, of Newnan passed away Wednesday, May 25, 2022 at Sacred Journey Hospice. She was born December 3, 1950 in Queens, NY to the late Walter Paul Catterson and Geraldine Strauss Catterson. Chris grew up in Westport, CT and was a 1968 graduate of Central Catholic in Norwalk, CT. She attended Flagler College in St. Augustine, FL and became a flight attendant for National Airlines. After living in various locales, including Alaska and Germany, she settled in Peachtree City, GA. She met her husband, Steve, there, and they married in 1993. In addition to earning her paralegal credentials, she also obtained her real estate license, working in that field until her retirement in 2007. She had a lifelong love of gardening and decorating, both in which she excelled. Survivors include her husband, Steven W. Seaman; daughter Jessica (Jason) Agur of Denver, CO, son, Christopher M. Zahrt of Denver, CO; step-son Bennett (Whitney) Adams of Atlanta; brother Robert (Anne) Catterson of Hot Springs Village, AR; nephew Paul (Kelley) Catterson of Smithville, MO; niece Kristine (Bryan) Oberc of Dyer, IN; granddaughters Mira Sue Agur, Celeste Agur, step-grandchildren Asa Adams and Montgomery Adams. A celebration of life for family and close friends will be held at a yet to be determined time. The family would like to recognize the dedication and care provided in Chris' last days by Sacred Journey Hospice, 60 Oak Hill Blvd., Ste 203, Newnan, GA 30265. The Parkinson's Foundation, www.parkinson.org provides hope and support for those with Parkinson's disease, and in lieu of flowers, your donations to either one of these fine organizations would be appreciated. McKoon Funeral Home & Crematory 770-253-4580

Mrs. Christine Ann Seaman, 71, of Newnan passed away Wednesday, May 25, 2022 at Sacred Journey Hospice. She was born December 3, 1950 in Queens, NY to the late Walter Paul Catterson and Geraldine Strauss Catterson. Chris grew up in Westport,... View Obituary & Service Information

The family of Christine Ann Seaman created this Life Tributes page to make it easy to share your memories.

Send flowers to the Seaman family.