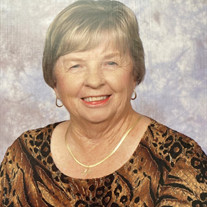 Mrs. Cleo "Kiki" Jones Ward, 84, of Newnan passed away Sunday, February 13, 2022. She was born November 9, 1937, in High Point, North Carolina to the late William Clyde Jones and Laura Beatrice Gurley Jones. In addition to her parents, she was preceded in death by her husband of 47 years, Daniel Murray Ward, her beloved sister Opal Jones Corl and brothers W. C. Jones, Jr., and Paul Jones. Cleo lived in many places throughout her life, but always found lasting friendships and a strong faith community. She graduated from Rockwell High School and Salisbury Business College, and as a newlywed she worked for R.W. Norman's of Salisbury. In 1964, Cleo and Dan moved to Asheville, North Carolina, much to Cleo's dismay. However, it did not take long for her to develop a life-long love of the Blue Ridge Mountains. Cleo worked in early childhood education for more than 34 years and was a devoted Sunday school teacher and youth volunteer. Her daughter, Tammy Ward Martin, was Cleo's only biological child, but she had countless children. She especially enjoyed the close bonds she shared with her grandsons, Daniel and David Martin. Cleo was an active member of any organization to which she belonged. She enjoyed hosting dinners, parties, and receptions. Cleo was never happier than when busy with a house full of people. At St. Paul's Newnan, she planned day trips for seniors and prepared Lenten luncheons and teas for the St. Paul's Festival of Flowers. Cleo was also a talented seamstress creating elaborate costumes, choir robes, evening gowns, and draperies. Her artistry was an integral part of many peoples' life events and homes. Cleo is survived by her daughter, Tammy (Rusty) Martin; grandsons, Daniel (Samantha) Ward Martin, David Allen Martin; brothers, Guy Jones, James Jones; and extended family. The memorial service is 11:00 am Saturday, February 19, 2022, at St. Paul's Episcopal Church with Rev. Hazel Smith Glover officiating. There will be a reception following the memorial service at the home of Mrs. Ward's daughter, Tammy. Rather than flowers, memorial contributions may be made to St. Paul's Episcopal Church, 576 Roscoe Rd, Newnan, GA 30263. Condolences may be expressed online at www.mckoon.com McKoon Funeral Home and Crematory 38 Jackson Street Newnan, GA 30263 (770) 253-4580

Mrs. Cleo "Kiki" Jones Ward, 84, of Newnan passed away Sunday, February 13, 2022. She was born November 9, 1937, in High Point, North Carolina to the late William Clyde Jones and Laura Beatrice Gurley Jones. In addition to her parents, she was... View Obituary & Service Information

The family of Cleo "Kiki" Jones Ward created this Life Tributes page to make it easy to share your memories.

Send flowers to the Ward family.