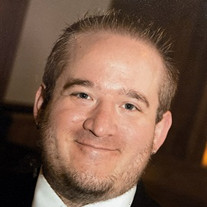 Daniel Pierpont Taylor, born November 14, 1974, died Friday night 4/15/2022 at his home in Newnan. He fought hard for three and a half years after suffering a burst brain aneurysm and subsequent complications - never giving up or letting go of his joy and laughter. He was surrounded by love and family Friday as he peacefully made his way to Heaven. He is survived in life by his wife Amanda, daughters Phoebe and Emersyn; his parents Dr. Robert and Jane Taylor; siblings John Taylor & wife Lynn and Lynne Brague & husband Cary; and a crew of nieces and nephews: Nick, Grant, Matthew, Ansley, Nadia and Aidan. Daniel graduated from The Walker school and then from Kennesaw University with a Bachelor of Business Administration degree. Later he received his paralegal certification from Emory University. At the time of his aneurysm, he was Team Lead of ATL Production at NetRoadShow in Atlanta, Georgia. Daniel was the great, great, great grandson of James Lord Pierpont, author of Jingle Bells. Maybe from there sprang his love of music. He spent over half of his life playing bass and guitar in various local bands all over the southeast, appearing at venues like The Masquerade, Wreck Room, 10 High Club, Dark Horse Tavern, and The Strand, to name a few. He released several solo albums under the name DarlingD. Most recently he was an active member of the praise and worship team at Crossroads Church in Newnan where he played bass. He was also an active member and leader in the F.A.I.T.H. Riders ministry of Crossroads. He loved big and he loved fully. Most Friday nights he could be found sharing a meal with his parents and after attending Marietta High football games with his father. He was an honored recipient of the Boy Scouts Eagle Award and enjoyed continuing to be a part as he sat on many recommendation boards for future Eagle Scouts. He was most proud of he and Amanda becoming foster parents in late 2015. Up until the time of his aneurysm he was able to be a foster or respite parent to over 20 children. There will be a Celebration of Life on Saturday, April 30th at Crossroads Church 3260 GA-16, Sharpsburg, GA 30277 (770) 254-0291 1pm Visitation 2-3pm Celebration of Life Condolences may be expressed to the family at www.mckoon.com The family suggests any donations in Daniel's name be made to Hope Revisited, www.hoperevisited.com a foster care visitation center in Newnan, Georgia. More information about Daniel can be found at https://www.caringbridge.org/visit/danielptaylor McKoon Funeral Home & Crematory (770) 253-4580

Daniel Pierpont Taylor, born November 14, 1974, died Friday night 4/15/2022 at his home in Newnan. He fought hard for three and a half years after suffering a burst brain aneurysm and subsequent complications - never giving up or letting go... View Obituary & Service Information

The family of Daniel P. Taylor created this Life Tributes page to make it easy to share your memories.

Send flowers to the Taylor family.