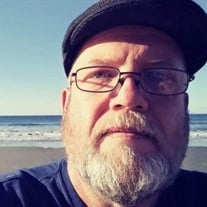 Daniel Clayton (Clay) Perry, 54, of Newnan Georgia, passed away Tuesday, April 26, 2022. His passing was sudden and unexpected. He was born and spent his entire life in Coweta County. Clay spent his professional career of thirty-six years working in the textile, printing and, most recently, the fabrication and machining industries as an office, payroll, and HR manager. He was highly respected for his talents and work ethic. While his career was important to him, Clay will be most fondly remembered for the beautiful artwork he created at Crickhollow Studios. An accomplished wood carver and sculptor, his walking sticks, magic wands, Christmas ornaments and various sculptures were sold and shipped all over the world. His work was well-known locally and abroad and was featured in many local art shows and folk-art markets. His talents as a carver and sculptor were matched only by his talents as a writer and consummate storyteller. Clay developed a large and varied following on the web for his blogs, artwork, and his social media commentary. He was known to be brash, opinionated, grumpy, and cantankerous, but always a devout advocate of Truth and Personal Liberty. He loved his home, his family, and his country and spared nothing in defending them. He had little time or patience for ignorance, arrogance, or stupidity but he always had a keen eye open on the world and a sharp tongue to match it. He was never afraid to speak his mind. Clay was also an unmatched grill master who never tired of finding new foods to cook in new ways with only an open fire and his talents to guide him. His family harbors a long tradition of outdoor cooking. A dedicated father to two sons, Clay's family always came first in his life. He was devoted to maintaining his family legacy and instilling in his children the simple core values that had always guided his life as a True Southern Gentleman. A private ceremony has already been held for the close family. A Celebration of Life for Clay will be announced later this summer and all friends and relations will be notified in due time. He is survived by his wife Julie and his sons Patrick (Alisa) and James. He is also survived by his brothers David (Pam) and Stuart (Rachel) as well as his sister Alyson Putnam (Ray). He leaves behind also his brother-in-law Jim Fairfield and sister-in-law Janice Hill (Dave). As well as many nieces, nephews, cousins, aunts, and uncles, too many to be listed here. Condolences may be expressed online at www.mckoon.com Clay is deeply loved and will be sorely missed by all who knew him. In lieu of flowers, his wife has requested that friends and relations post stories, memories, and pictures to his social media outlets. McKoon Funeral Home & Crematory (770) 253-4580

Daniel Clayton (Clay) Perry, 54, of Newnan Georgia, passed away Tuesday, April 26, 2022. His passing was sudden and unexpected. He was born and spent his entire life in Coweta County. Clay spent his professional career of thirty-six years... View Obituary & Service Information

The family of Daniel Clayton Perry created this Life Tributes page to make it easy to share your memories.

Send flowers to the Perry family.