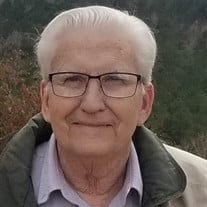 Daniel H. White (Danny) 1931-2021 Danny, 90 years young was called home by our Lord Jesus on August 12th, 2021 after a very full life as a loving husband of 56 years, dedicated father, grandfather and great grandfather. Born in South Georgia on May 7, 1931, Danny grew up as a sharecropper's son. He was drafted to serve our country in the Korean conflict, and soon became an Army Staff Sargent. After completing his military service, Danny attended the South Georgia Technical College, where he received his Airframe / Power-plant license. Danny soon moved to the Atlanta area, (Mableton) where he lived and enjoyed a career as an aircraft mechanic, and FAA authorized inspector for more the 35 years. After his retirement, Danny moved to Sharpsburg, Georgia where he and his beloved wife Barbara lived for the remainder of their years. Danny was preceded in death by the love of his life, wife Barbrara E. White, his mother and Father, Clayton K White and Mattie Lou; bother Jimmy, and sister Lavonia. Danny is survived by 2 sons, and a daughter...David A. White and wife Cindy of Marietta Georgia, Steve G. White and wife Tonnya of Seminole Florida, and Donna L. Madsen and husband Micheal of Panama City Beach Florida. Also, surviving are 10 grandchildren, and several great grandchildren, along with nieces and nephews. A brief graveside memorial will be held on September 14th promptly at 3pm at Georgia National Cemetery 2025 Mount Carmel Lane Canton, Georgia 30114 In lieu of flowers, the family prefers that donations be made in Danny's memory to his home church: Line Creek Baptist Church PO Box 757 Sharpsburg, Georgia 30277. McKoon Funeral Home & Crematory (770) 253-4580.

The family of Danny Harwell White created this Life Tributes page to make it easy to share your memories.

Send flowers to the White family.