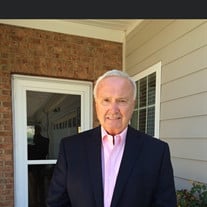 David Carl Burnette of Newnan, GA, passed suddenly on November 7, 2021, at the age of 80. He is predeceased by his parents, Parma and Amos Burnette, as well as his first-born child, Karen, and her husband, Jim, who preceded him earlier this year. He is survived by his loving wife of 57 years, Jeri Burnette, their sons Eric and Jeff, their wives Stephanie and Becky, their grandchildren Ben and Katherine, Ruthie, Nan, Kathleen and their mother, Betsy, and Chip and Scottie; his step-grandchildren Maggie and Montana and step-great-grandchildren Parker, Lincoln and Bear; as well as his sister and brother-in-law Dawn and Jeff Kernodle, their daughters Kelli and Jennifer, their grandchildren and great-grandchildren; his nephew Edward Newton and his wife, Stephanie, and their children. David was born in Oak Hill, West Virginia and attended Fayetteville High School, where he was quarterback of his varsity football team and guard of the varsity basketball team. He graduated with a degree in History from East Tennessee State University, where he met his wife, Jeri. He spent much of his life in Athens, GA, calling it home for 35 years. After a long career in sales, he spent a dozen years working in the business office at Athens Academy, where his sons had attended high school. He enjoyed supporting the athletic department, especially the football program. He was an elder at Friendship Presbyterian Church and later an active member of First Baptist Church of Athens. David and Jeri retired to Newnan, GA and spent part of each year in Highlands, NC, where they met wonderful friends. Their active life in Newnan included beloved friendships in their neighborhood, The Commonwealth at Calumet, and their church family at First United Methodist Church. He liked spending time at the beach, watching college football, working out in the gym, going to aqua aerobics, attending bible study and texting with his grandchildren, who called him Poppy. He was exceedingly proud of his grandchildren's accomplishments and watched his granddaughter play in the volleyball State Championship representing Newnan High School on his 80th birthday this October, surrounded by family. David's zest for life was contagious and many recall both his warmth and thoughtfulness. He loved singing with his wife in the senior choir and going on the trips that she planned. David was a friendly face to many with an inquisitive mind, a ready question, a love of history and a sly sense of humor. He was much loved and will be long missed. The memorial service celebrating David's life is Thursday, November 11, 2021 at 11:00 AM at Newnan First United Methodist Church, in Newnan with Rev. Charles Robinson officiating. The family will recieve friends following the service at the church. In lieu of flowers, please donate to Newnan's First United Methodist Church "Mission's Program", 33 Greenville Street, Newnan, GA 30263. Condolneces may be expressed to the family online at www.mckoon.com. McKoon Funeral Home & Crematory 770-253-4580

David Carl Burnette of Newnan, GA, passed suddenly on November 7, 2021, at the age of 80. He is predeceased by his parents, Parma and Amos Burnette, as well as his first-born child, Karen, and her husband, Jim, who preceded him earlier this... View Obituary & Service Information

The family of David Carl Burnette created this Life Tributes page to make it easy to share your memories.

Send flowers to the Burnette family.