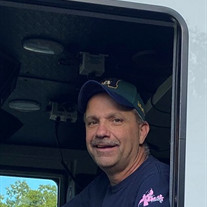 On Thursday, January 6, 2022 the Lord received a wonderful man. Donald "Bubba" Wayne Hammond passed away at the age of 53 peacefully at home after a long battle with esophageal cancer. He was loved by many and never met a stranger. Bubba always made people feel comfortable and accepted for who they were. He always treated friends as a second family. With an excellent sense of humor and a good heart, all who met him would say he was the best man to be around. If Bubba was not at the Fire Station he spent his time camping or at Walt Disney World with his family. He was at his happiest while camping at Disney World. However, as long as he was with his family he was having fun, no matter where he was. Bubba had a service heart, which shows that with 30 years with the Coweta County Fire Department. At the age of 50 he worked hard to earn his Paramedic License, showing the "young guns" that even the old guys can learn new tricks. Bubba left with lots of love to his wife, best friend, and soul mate of 30 years, Shannon, his youngest daughter Kayleigh, his oldest daughter and her husband, Kristian and Jeff Flinn Jr. His father-in-law David Segrest, and mother-in-law Karen Segrest always regarded him as a true son, not just a son-in-law. His parents Neal and Wynell Hammond have already gone to join our Heavenly Father. His love for his brothers Mike Hammond, wife Vicki, Ray Hammond, wife Missy, and brother-in-law Chris Segrest, wife Ashley, was always front and center. He was always the fun uncle to his many nieces and nephews. "Don't cry for me, for I have no fear. All my pain is gone and Jesus took my tears. Don't cry for me. This is not the end. I'll be waiting here for you when we meet again." Please join his friends and family for a memorial service to celebrate and tell stories of Bubba's wonderful life while we wear Hawaiian shirts or hot pink on Saturday, January 15th from 11am to 1pm at Fire Station 8 on 689 Dixon rd. Newnan, GA 30263. Condolences may be expressed online at www.mckoon.com With his love of the Fire Department, instead of flowers, memorial contributions can be made to the Firefighter Cancer Support Network at https://firefightercancersupport.org/how-you-can-help/donate/ McKoon Funeral Home & Crematory (770) 253-4580

On Thursday, January 6, 2022 the Lord received a wonderful man. Donald "Bubba" Wayne Hammond passed away at the age of 53 peacefully at home after a long battle with esophageal cancer. He was loved by many and never met a stranger. Bubba always... View Obituary & Service Information

The family of Donald "Bubba" Hammond created this Life Tributes page to make it easy to share your memories.

Send flowers to the Hammond family.