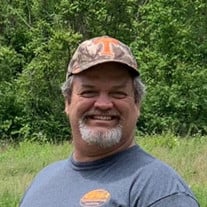 Buddy (Donald D) Carr November 28, 1966 - August 21, 2021 The man, the myth, the legend, a veteran, a husband, a father, a son, a brother, a friend to thousands, a best friend to many and a Jack of All Trades. He was a simple man that lived life the best way he knew how. He treated everyone with respect and love. Originally from California, Buddy moved to Tullahoma, TN early in life. He graduated from Tullahoma high school in 1985, where he met the love of his life Krista Ledbetter, whom he would marry in 1991 and raise two wonderful children together Aaron Michael Carr, 1996, and Morgan Nicole Carr, 1999. They are members of Cornerstone First United Methodist church in Newnan, GA. Buddy enlisted in the United States Navy in 1988 and became an Aircrewman, call sign Budman. A proud veteran of Desert Shield/Storm and earned combat veteran status. He was a 1st Crewman and an aviation electronics tech at HM-14 from 1988-1992. He then served as a Flight Tech for VQ-3 from 1992 till his honorable discharge in 1996. He was awarded numerous citations and medals during his career in the Navy. After leaving the Navy Buddy was hired as an avionics tech for Delta Air Lines since October 2000. Buddy is survived by his loving wife and two children Krista, Aaron, and Morgan Carr; his parents Bonnie and Joe Moore of Fairborn, OH and brothers Dean Carr of Kentucky, and Joey Moore of Fairborn, OH. Buddy will be dearly missed by many and all, including surviving Father in Law Carl Ledbetter of Tennessee, and sisters in law Valerie Ledbetter and Cheryl Ledbetter of Atlanta GA. Your watch is over, Fair winds and following seas my Brother, USN A celebration of Buddy's life will be held Saturday, August 28, 2021 at 11:00 AM in the chapel of McKoon Funeral Home 38 Jackson St. Newnan, GA 30263. The family will receive friends one hour prior. Condolences may be expressed to the family at www.mckoon.com McKoon Funeral Home & Crematory (770) 253-4580.

The family of Donald Dwayne Carr, Jr. created this Life Tributes page to make it easy to share your memories.