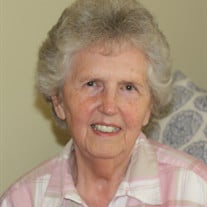 Dora Sue Deck (Sue) returned to her heavenly home on March 12, 2021 at the age of 78, after a brave battle with Lewy Body dementia. Sue was born on January 30, 1943 in Knoxville, Tennessee to Leon and Pearl Biddle. She married Donald A. Deck (Don), the love of her life, on July 10, 1960, and was sealed in marriage to him for time and all eternity in the Atlanta Georgia Temple of the Church of Jesus Christ of Latter-day Saints in July 1993. Together, they raised one son, Jeffrey Deck. Sue, a strong, determined and tenacious woman, was a loving wife, proud mother, grateful grandmother and trusted friend. She worked in banking for more than three decades, helping customers at The First State Bank’s Fairview, Stockbridge and Hudson Road locations, retiring in 2011. Sue also enjoyed sewing, baking, and cooking and was pleased to have one of her recipes published by Southern Living in 1994. Described as a bright and friendly soul, Sue was most fulfilled when she was helping others. As a faithful member of the Church of Jesus Christ of Latter-day Saints, Sue found great joy and purpose in church service. She was always willing to assist her fellow parishioners, neighbors or anyone in need. Some of the many ways Sue put her faith into action was serving as a volunteer at Piedmont Fayette Hospital and delivering Meals on Wheels to elderly residents in Henry County and Fayette County. She also made blankets for family, friends and local pregnancy crisis centers, as a token of her Christlike love for others. Sue was preceded in death by her husband Don, her father Leon, her mother Pearl, her brother William Charles and her niece Jacki Garland. She is survived by her son Jeffrey, his wife Kam and daughter Kamdyn of Newnan, Georgia, her sister JoAnn Garland of Knoxville, Tennessee, and her children Jamey and Jodi Garland and Jessica Baldwin. Visitation will be held Wednesday, March 17, at McKoon Funeral Home on 38 Jackson Street in Newnan, Georgia from 6 to 8 p.m. A funeral service celebrating Sue’s life will be held Thursday, March 18, at The Church of Jesus Christ of Latter-day Saints Fayetteville location (2021 Redwine Road) at 11 a.m. For those unable to attend the funeral, the service will be broadcast live via Zoom (ID 858 4637 7034, Passcode 306076). Sue will be laid to rest Friday, March 19, at 11 a.m. at Clark’s Grove Cemetery in Maryville, Tennessee, beside her eternal companion, Don. The family asks those attending any of the services to please wear masks and practice social distancing to promote health and safety. Condolences may be expressed to the family online at www.mckoon.com. McKoon Funeral Home & Crematory 770-253-4580

Dora Sue Deck (Sue) returned to her heavenly home on March 12, 2021 at the age of 78, after a brave battle with Lewy Body dementia. Sue was born on January 30, 1943 in Knoxville, Tennessee to Leon and Pearl Biddle. She married Donald A. Deck... View Obituary & Service Information

The family of Dora Sue Deck created this Life Tributes page to make it easy to share your memories.

Send flowers to the Deck family.