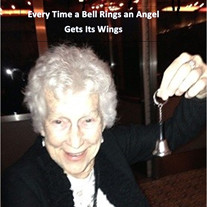 Dorothy Louise Murrill Hardy Dohm Born March 7th, 1927 ~ Died Tuesday, August 18th, 2020 It’s a Wonderful Life Not many people have their dreams fulfilled, Dorothy’s was to see the world…and she did. From Mobile, Alabama to Pakistan, Europe, and many U.S. States in between, Dorothy would not hesitate to grab her suitcase and step out on one of her many adventures. Even though she was always on the go, love did find Dorothy. She and her 1st husband, Richard H. Hardy, had four children, nineteen grandchildren, twenty-six great grandchildren, and three great-great grandchildren. After Richard’s death, Dorothy and her childhood sweetheart, William F. Dohm, married. He also passed in 2001. Dot’s four surviving children, Candace Matson, Richard H. Hardy Jr., Deborah Hardy Geyer, Stephanie Vaughan, and their families mourn her passing, but know she is only traveling from this life on the way to her final adventure. Dorothy is also survived by her sister, Betty Robinson, of Mobile, Alabama. Dorothy saw the world, and now she is journeying on her way to join her loved ones in the afterlife. An inspiration to all she met, her love, laughter, and quick wit will be missed. A viewing for Dorothy will be held Monday, August 24th, 2020, from 5-7 p.m., at the McKoon Funeral Home, 38 Jackson St., Newnan, Georgia 30263. Condolences may be expressed to the family online at www.mckoon.com. McKoon Funeral Home & Crematory 770-253-4580

The family of Dorothy Louise Dohm created this Life Tributes page to make it easy to share your memories.

Send flowers to the Dohm family.