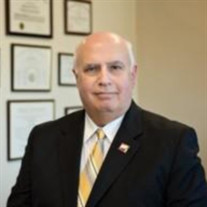 Dr. Jeffrey R. Folk, beloved husband, father, grandfather and healthcare leader passed away on May 12, 2021 at his home in Newnan, GA, surrounded by his loving family after a year long battle with pancreatic cancer. Jeff was born on October 23, 1956 in Reading, PA, to Raymond and Mary Lou Folk. He is survived by his loving wife of 35 years, Mary Ann, his three children Kristen (Folk) Conaway, Lauren (Folk) Ercolini and Christopher Folk, and his granddaughter, Reagan Conaway. Jeff had an impressive career having spent 35 years as a physician and 20 years as a healthcare leader. He graduated summa cum laude from Albright College before attending Temple University School of Medicine. He completed fellowships in Internal Medicine and Cardiology at Geisinger Medical Center and in 1997 graduated from King’s College with his Master’s in Healthcare Administration. Residing in northeastern Pennsylvania from 1985 to 2010, Jeff worked for 22 years at Geisinger Wyoming Valley Medical Center in Wilkes-Barre, where he rose to Medical Director in 2002. Described by the Chairman of the Board as a “visionary,” Jeff led the organization through many transformative milestones. His accomplishments included designing and spear heading construction of the Pearsall Heart Hospital, establishing the Janet Weis Pediatric Unit and pediatric hospitalist program, recruiting key talent for the organization and improving operational efficiencies across multiple areas of the hospital. In 2010, Jeff spent a year as Chief of Cardiology at ABQ HealthPartners (currently known as DaVita Medical Group) in Albuquerque, NM, where he helped make significant financial improvements - all while expanding programs and upgrading essential equipment. For the past 10 years, Jeff worked as Chief Medical Officer for Piedmont Newnan Hospital in Newnan, GA, before retiring in April 2021. During his first year there, Piedmont Newnan earned its first Leapfrog “A” Hospital Safety Grade, a top grade the hospital earned 12 consecutive times under Jeff’s leadership. Jeff also led Piedmont Newnan to earn top awards for Patient Safety, ranking the organization among the top 10 hospitals in the country for patient safety and clinical excellence. Known for his excellent listening skills and famous candy jar, Jeff was a beloved mentor to countless healthcare professionals. Despite rising to executive levels, he never stopped working for his patients and community. Jeff continued to see patients whenever possible and spent time volunteering as a cardiologist at Coweta Samaritan Clinic. Whenever he was not at the hospital, Jeff could usually be found on the golf course or working in his model train garden. He loved to travel the world with his wife and children – sharing wonderful experiences with them like biking through historic cities in Europe, going on safari in Africa or feeding the kangaroos in Australia. Never one to miss the opportunity for a good joke or witty comment, Jeff will be remembered for his sense of humor which he eloquently displayed during the speeches he gave at his daughters’ weddings. He will be deeply missed by his friends, family, and all who knew him. A viewing will be held at McKoon Funeral Home from 4:00 to 7:00 PM on Sunday, May 16th, followed by a funeral mass at Saint Mary Magdalene Catholic Church at 10:30 AM on Monday, May 17th. Jeff will be buried in his home state of Pennsylvania on Wednesday, May 19th. In leu of flowers, donations can be made to the Coweta Samaritan Clinic (137 Jackson Street, Newnan, GA 30263). Condolences may be expressed to the family at www.mckoon.com McKoon Funeral Home & Crematory (770) 253-4580.

Dr. Jeffrey R. Folk, beloved husband, father, grandfather and healthcare leader passed away on May 12, 2021 at his home in Newnan, GA, surrounded by his loving family after a year long battle with pancreatic cancer. Jeff was born on October... View Obituary & Service Information

The family of Dr. Jeffrey R. Folk created this Life Tributes page to make it easy to share your memories.

Send flowers to the Folk family.