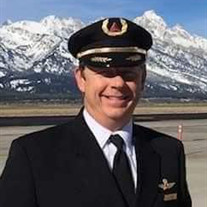 Newnan, Georgia - Captain Duane Eugene Romey, 53, of Newnan and formerly of Bourbonnais, Illinois, went to be with his Lord and Savior at 1:39 p.m. EDT Thursday, September 9, 2021 at Piedmont Newnan Hospital. Duane was born November 8, 1967 in Kankakee, Illinois and grew up in Bourbonnais, Illinois. He was the beloved son of Byron and Norma (Wickham) Romey of Clearwater, Florida. He married Shelley Randolph on May 4, 2002 in Grapevine, Texas. She survives. Other survivors include his three children: Chase Wickham, Kendall Paige, and Duncan Neel Romey, all at home; his sister: Donna (James) Pardew of Indianapolis, Indiana; father/mother-in-law: Corky and Dorothy (Neel) Randolph of Fort Myers, Florida; sister-in-law's: Stephanie Saum of Lehigh Acres, Florida, Danyne Bharj (Surj) of Oolteweh, Tennessee; brother-in-law's: Misha Randolph (Amy) of Naples, Florida, Jeremy Randolph (Stephanie) of Fort Meyers, Florida; numerous aunts, uncles, nieces, nephews and cousins. Duane was preceded in death by his maternal grandparents: Clinton and Minerva Wickham and paternal grandparents: E. Eugene and Thelma Romey; brother-in-law: Vince Saum. Duane was a 1986 graduate of Bradley Bourbonnais High School. In 1990 he graduated from Olivet Nazarene University with a Bachelor's degree in History/Political Science, and in 1995 completed his Master of Science in Management at Southern Nazarene University in Bethany, Oklahoma. Duane's early interest in aviation lead him to start flying at 16 while in high school. Duane's flying career ignited his passion for instruction which became a life-long pursuit. After numerous jobs building experience in his flying career, Duane was hired at Delta in late 2001. During the next 5 years, while waiting to be recalled following the 9/11 furloughs, Duane and his wife Shelley, moved to Australia in September 2005 where he worked for Aero Rescue, training their crews in the special mission Dornier 328. They returned to the United States and moved to Newnan, Georgia in February 2008. Duane attained the rank of Captain flying the Airbus A320. Duane attended the Calvary Chapel Newnan Church. His community activities were extensive, though he was most proud of his volunteer work introducing many future pilots to aviation through the EAA Young Eagles program and his involvement in the Civil Air Patrol. Duane had many hobbies; playing tennis, flying, traveling with his family, listening to country music, hymns, and bad '80s music. Duane touched many lives and will be deeply missed by all that knew him. An open air Celebration of Life service will be held at 11 a.m. EDT Saturday, September 18, 2021 in Duane's hangar at the Two Rocks Airport in Newnan, Georgia. Officiating: Dr. Joel Dover and Rev. Carl Romey. The family request in lieu of flowers, contributions may be made to the Duane Romey Young Aviator Scholarship. Link: https://gofund.me/4f73b417 Condolences may be expressed online at www.mckoon.com McKoon Funeral Home & Crematory (770) 253-4580

The family of Duane Eugene Romey created this Life Tributes page to make it easy to share your memories.