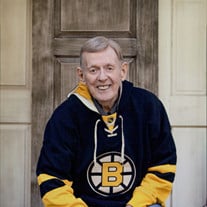 Edward John BUCKLEY of Newnan, GA. passed on to Heaven peacefully on March 1, 2022, comforted by his. SPECIAL Friend, Sadie McCarthy and his son Ed and Ed's wife, Ikumi Buckley. He was born 86 years ago in Boston Mass. and spent the earlier part of his life in the Brighton Section of Boston where he met his wife of 59 years, Ellen Pauline Buckley, who passed away in 2016. He graduated from St. Columbkille High School in Brighton/Boston and went on to Boston College after receiving a Full Scholarship to play Baseball. One of his most special memories, at this time, was when he had the opportunity to pitch to the Famous Boston Red Sox Star, Ted Williams. He soon was drafted by the Phillies and pitched for their Minor League Team in Canada. Shortly thereafter, he hurt his arm and left baseball to marry Pauline in 1957. This began his teaching and coaching career, that included another one of his life's highlights, teaching French at Bernards High School in New Jersey, to the Famous, Meryl Streep. Also at this time, he and Pauline, together, raised 5 children, as he continued his teaching and coaching career at Hunterdon Central Regional High School in Flemington New Jersey. He retired as Assistant Principal in 1988 and moved to Wilmington, NC. Ed and Pauline traveled the World in their retirement forming a group called, The Cape Travelers. Ed's love for traveling and his storytelling was exceeded only by his love for family and friends. He was an avid sports fan of the Boston Bruins, Celtics and actually the New York Yankees. He was a beloved Father, Grandfather, Great- Grandfather, Uncle and friend and will be deeply missed. Ed was predeceased by his wife Pauline, daughter Pauline Feldman, Son-in-law, Don Hagerty and granddaughter Erin Hagerty. He is survived by his sons, Edward Buckley Jr. (Ikumi) of Newnan GA, Mark Buckley (Lisa) of Yardley, PA, Carolyn Hagerty of Somers Point, NJ, Kristine Buckley of Wilmington, NC, and all his Grandchildren and Great Grandchildren. Relatives and friends are invited to attend a viewing on Thursday Evening, March 3rd, from 6-7 PM at McKoon Funeral Home, 38 Jackson St. Newnan, GA 30263. Funeral Mass will be held at 11:00, Friday, March 4, 2022, at St. George Catholic Church, 771 Roscoe Rd, Newnan, GA 30263 with interment to follow at Forest Lawn Memorial Park. In lieu of flowers, Memorial contributions may be made in Ed's Honor to St Jude's Children's Research Hospital (https://www.stjude.org/donate/donate-to-st-jude.html?sc_icid=header-btn-donate-now) or to the Ronald McDonald House Charities (https://www.rmhc.org/). Online condolences may be sent to the family at www.mckoon.com McKoon Funeral Home & Crematory (770) 253-4580

Edward John BUCKLEY of Newnan, GA. passed on to Heaven peacefully on March 1, 2022, comforted by his. SPECIAL Friend, Sadie McCarthy and his son Ed and Ed's wife, Ikumi Buckley. He was born 86 years ago in Boston Mass. and spent the earlier... View Obituary & Service Information

The family of Edward John Buckley created this Life Tributes page to make it easy to share your memories.

Send flowers to the Buckley family.