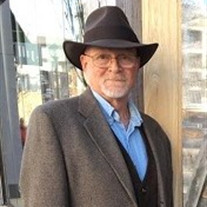 Edward, age 61, suffered a hemorrhagic stroke on December 29th at his home in Chattahoochee Hills, GA. He fought bravely, but God had other plans for him and he passed away at Grady Memorial Hospital on January 2, 2021. Edward was born in Burbank, California and later lived in Kentucky and Florida before finally moving to Georgia. He proudly served in the United States Navy. Edward worked in the printing industry for over 36 years, recently employed by Heidelberg as a consumables sales rep. He loved sitting in the sun reading a good book and enjoying a fine cigar. He loved playing Scrabble and cards. His favorite activity was watching outdoor movies. Even if it was 40 degrees outside, he and his wife Laura would bundle up in down blankets and watch movies under the stars. Eddy was a volunteer firefighter with the city of Chattahoochee Hills and was always ready to help anyone in need. He dearly loved his community and its citizens. He felt so lucky and blessed to live there. Edward was quiet and reserved, but had a wicked sense of humor. Although quiet, when he spoke it was often profound. He studied many different religions and was always questioning the meaning of life. Edward enjoyed nature and found great pleasure in watching birds, sandhill cranes being his favorite. Edward loved all animals, but especially dogs. He always said he loved dogs more than people because they love unconditionally and don't judge you. Edward was married to the love of his life, Laura for 36 years. They were married in a little white church-New Hope United Methodist in Chattahoochee Hills. They married simply and lived simply and that brought them great joy. Edward was preceded in death by his mother Diane Corbitt. He is survived by his wife Laura Jones Richards, his sister Susan Wells, brother-in-law David Wells, niece Susie Wells, sister-in-law Anita Wallace and her husband Jon Wallace, sister-in-law Bridget Arrington and her husband Perry Arrington, nieces Jennifer Tutton and Rebecca Bradley, nephews Dana Chastain and Brandyn Walker. Numerous great nieces and nephews. The family will be having a wake in the near future at Laura's residence in Chattahoochee Hills and would love for his friends and family to help celebrate his amazing life. In lieu of flowers, memorials may be made in his name to The Salvation Army. Condolences may be expressed to the family online at www.mckoon.com. McKoon Funeral Home & Crematory 770-253-4580

Edward, age 61, suffered a hemorrhagic stroke on December 29th at his home in Chattahoochee Hills, GA. He fought bravely, but God had other plans for him and he passed away at Grady Memorial Hospital on January 2, 2021. Edward was born in... View Obituary & Service Information

The family of Edward Richards created this Life Tributes page to make it easy to share your memories.

Send flowers to the Richards family.