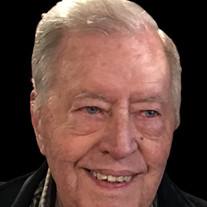 Edward L. White, age 87 of Newnan, GA went home to his Lord on Saturday 28 November 2020. He passed peacefully at home surrounded by family. He was well known as a man of few words, but one whose actions spoke loudly for his love and commitment to family and friends. He is survived by Sandra May White, his wife of 58 years, son Randy and daughter-in-law Deborah Kaye White of White GA, son Mark and daughter-in-law Sharon Anderson White of Alexandria VA, 7 grandchildren, and 8 great-grandchildren. The family will host visitation at McKoon Funeral Home in Newnan GA from 12:30-2:00 on Thursday, December 3, 2020. That will be followed by a 2:00 memorial service at the funeral home officiated by Reverend Larry Burgess. He will be interred with military honors in a family-only ceremony at Georgia National Cemetery. Honorary pallbearers are grandsons Alexander White of Virginia, Nicholas White of North Carolina, Ian White of Oklahoma, and grandsons-in-law Jesse Griffin of Kennesaw, Jason Coleman of Acworth, and Ryan Lisk of Marietta. Donations in his honor are welcomed in lieu of flowers. Gifts can be made by check to “Hopewell Primitive Baptist Church in honor of Edward L. White: attention Honorable Mayor Denney Rogers”. The address is PO Box 332 Roopville, GA 30170. The church was built in 1867 by his great-grandfather James A. Denney and funds are used to maintain and continue the historic church and cemetery, which still holds annual Sacred Harp singing and dinner on the grounds the third Sunday in every June. Ed was born in Hogansville, GA in August 1933 to Pauline Denney White and Joe Henry White as the 3rd of six children. He is the last to pass of his three brothers and two sisters. At Hogansville High School, he was a star student, baseball pitcher and basketball center. At 6’ 2” tall, he held the high school high jump record at 6’ 6” with a straddle jump! He had the unusual experience of graduating high school twice – first in 1950 from 11th grade, and then again in 1951 as the school added a 12th grade. Immediately after graduation, he “convinced” his mother to sign papers allowing him as a 17-year-old to follow his oldest brother, Tilman (T-Bo) into the US Air Force. He served in the European theater in France as a Staff Sergeant in the Judge Advocate General (JAG) office. He was honorably discharged and returned home in 1955. He attended business school at Georgia State University. He was introduced to Sandra May in 1962 by his brother, Charles, who was the high school basketball coach for Sandra’s brother Gary. They married in Atlanta in June 1962. He worked General Manager and Chief Financial Officer roles in the automobile industry, finishing his career as CFO for the Ed Voyles family of dealerships. Ed was an avid lifetime golfer, and he and Sandra enjoyed a large group of friends square dancing and traveling around Georgia, the US, and the world. Edward Lee White 1933-2020 – Strength, Honor, Family Condolences may be expressed to the family at www.mckoon.com McKoon Funeral Home & Crematory (770) 253-4580.

Edward L. White, age 87 of Newnan, GA went home to his Lord on Saturday 28 November 2020. He passed peacefully at home surrounded by family. He was well known as a man of few words, but one whose actions spoke loudly for his love and commitment... View Obituary & Service Information

The family of Edward Lee White created this Life Tributes page to make it easy to share your memories.

Send flowers to the White family.