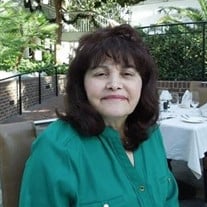 Elane Maria Rodrigues de Carvalho Jackson was born on December 20, 1944 in Trindade, Goiás, Brazil, to Olivia Maria de Carvalho and Fortunato Rodrigues de Carvalho. In her teenage years, she moved along with her family to Brasília, Brazil, and was one of the pioneer families to settle in the newly formed capital city. She lived there until she came to the United States in 1966 and resided in Bowdon, Georgia, where she worked for Senator Lamar Plunkett at Lamar Manufacturing and attended West Georgia College. In 1969, she moved to Charlotte, Tennessee, where she began working for Red Cap Industries on January 5, 1970, which later became VF Corporation. She retired after a 47-year career with VF and moved to Newnan, Georgia, to be near her daughter, Ginger. Her proudest moment outside of having her daughter was when she became a citizen of the United States on June 23, 1995. Elane was a master seamstress, loved the outdoors and watching birds, deer and other wildlife, and adored her Tennessee Titans and Nashville Predators, but her passion was NASCAR, as she attended her first race at Talladega not too long after she came to the United States. She left this earth on December 6, 2020 and leaves behind her only child, her daughter, Ginger Jackson Queener of Newnan and her husband, Stanley; her granddaughter, Kathryn; her grandson, Joseph; her brothers, Roberto Davi de Carvalho (Lourdes) and Joao Rodrigues de Carvalho (Estella) of Samanbaia, Brazil; her half-sisters, Edna Ferreria of Brussels, Belgium; Elaine Rodrigues of Maraba, Brazil and Marilaine Rodrigues of Camp Grande, Brazil; special cousin, Terezinah Martin; along with many nieces, nephews, and cousins scattered through the United States and Brazil. She was preceded in death by her mother, Olivia Maria de Carvalho, her father, Fortunato Rodrigues de Carvalho, her brother Daniel, sisters Zika, Perolina, and Elza, her half-brother Fortunato, and her special brother-in-law, Joel. Her remains are in the care of McKoon Funeral Home in Newnan, Georgia. She will be cremated, and a private service will be held for immediate family. She will be laid to rest at the historic Rock Church Cemetery in Charlotte, Tennessee. Honorary pallbearers will include her son-in-law Stanley Queener, grandson Joseph Queener, Dr. Van Baker, Dr. Jonathan Bender, Dr. Sean Carr, former colleague Andy Luck, Paul Martin, and her Piedmont Newnan Silver Sneakers workout group. Special thank-you to the nursing staff of the 7th and 8th floors at Piedmont Newnan Hospital, Dr. Candice Delk, Michael Robertson, the outstanding team at Southwest Christian Hospice, and Father Henry Atem for your love and care during this special time. In lieu of flowers, the family asks that tax-deductible donations be made to Can’t Never Could, Inc., which supports families who are battling cancer or other adversities with non-medical expenses. You may do so by visiting cantnevercouldinc.com or by mail at P.O. Box 888, Newnan, GA 30263. Condolences may be expressed to the family online at www.mckoon.com. McKoon Funeral Home & Crematory 770-253-4580

The family of Elane Maria Rodrigues Jackson created this Life Tributes page to make it easy to share your memories.