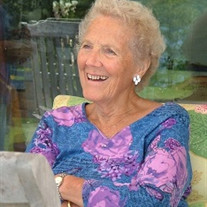 Eleanor “Ellie” Smith Farrington, 93, of Newnan, GA, formerly of Westbrook, ME, died Tuesday, September 8, 2020, at Brookdale Newnan Assisted Living. She was born on February 10, 1927 in Bangor, Maine to the late Harold D. Smith and Marion Leathers Smith. In addition to her parents, she was preceded in death by her husband of sixty years, A. Bernard “Bernie” Farrington; as well as her brothers Richard Smith and Sheldon Smith. She is survived by her children Cynthia F. Cameron of Charlotte, NC; David and Sandra Farrington of Atlanta, GA; Sheryl Farrington of Vero Beach, FL; Jayne B. Farrington of Charlotte, NC; and Brian and Leanne Farrington of Fayetteville, GA. Grandchildren include Heather and Jeff Parnell, and Darren and Mary Beth Cameron of Katy, TX; Tayla and David Lane of Savannah, GA; Christopher Schulz, Evan and Elvia Schulz of Miami, FL and Bernie Schulz of Charlotte, NC; Corrie and Anderson Mills of Gainsville, GA, Amy Farrington of Atlanta, GA and Anna and Drew Backer of Clayton, GA as well as 17 great grandchildren. Also surviving are her sisters Roberta Scott of Sullivan, ME; Barbara Haskell of Orrington, ME; Gloria Faulkner of Eddington, ME; and a brother Vaughn and Judith Smith of Bangor, ME and many nieces and nephews. Eleanor grew up in Bangor, Maine and was a 1943 graduate of Bangor High School. After high school, she was employed by Sears and Roebuck where she worked until she married Bernie. During their marriage, Eleanor stayed at home to raise their five children and was active in PTA and her church. She was a member of Columbia Street Baptist Church in Bangor, First Baptist Church of Westbrook and First Baptist Church of Newnan. Ellie became an accomplished seamstress, later starting a business buying and selling antiques and collectibles. When her youngest was in high school, she took a job at the Westbrook School Department as Secretary to the Superintendent. At 60, Ellie and Bernie made the transition to Newnan, GA to open the first Blimpie restaurant in the area, where she stayed until retirement nine years later. During this time Ellie took up oil painting, became a facilitator for a local Alzheimer’s support group, joined the local Kiwanis, held offices in the NCAA, and continued to serve in her local church. Condolences may be sent to the family at www.mckoon.com. Rather than flowers, the family respectfully requests that contributions be made in Eleanor’s memory to the First Baptist Church of Newnan, fbcnewnan.org OR to the Alzheimer’s Association. The mailing address to the Alzheimer's Association is as follows: Alzheimers Association Att. Georgia Chapter 4600 Park Road, Suite 250 Charlotte, NC 28209 In memory of Ellie Farrington A celebration of life will be held on Sunday September 13th, at 2:00pm in the chapel of McKoon Funeral Home 38 Jackson Street, Newnan, GA 30263. Masks are required. Streaming will be available. McKoon Funeral Home & Crematory | 770-253-4580

The family of Eleanor Smith Farrington created this Life Tributes page to make it easy to share your memories.

Send flowers to the Farrington family.