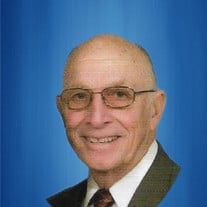 On the morning of his 89th birthday, Elmer Ray Kendall attended the greatest birthday celebration ever, as he crossed the gates of Heaven and joined His Savior and family and friends that had predeceased him. Elmer was born on October 5th, 1931 to William Kendall and Mary Mench Kendall. He loved growing up on the Eastern Shore of Maryland in the small town of Rock Hall where he was surrounded by his large family. He often recalled stories of going out on the crab boats of family members and bringing the crabs home to be steamed and made into his mother’s famous crab cakes. There was no doubt that there were no crab cakes anywhere that would equal those of his mother. Elmer served his county in the United States Army during the Korean War from 1949 until 1952. He was a proud veteran. He seldom spoke of his service; however, in 2017 he shared his story of his service during the Veteran’s Day Celebration. He was also honored with a Quilt of Valor. In October of 1952, he met the love of his life, Katherine Vickery. Two weeks later they married and spent the next 60 years together until her death in 2013. Elmer spent most of his adult life employed in the trucking industry in Atlanta. Later he ended his working years as a Corrections Officer for Coweta County. Elmer was a devout Christian, and served as a deacon at Glenwood Hills Baptist Church, Unity Baptist Church and First Baptist Church of Newnan. Following his years of service at First Baptist, he was named Deacon Emeritus. Elmer and Katherine found joy in visiting those who were shut ins and nursing home residents. They were famous for their candied peanuts that they gifted many of the residents. Preceding him in death besides his parents and wife are two sisters, Pearl Frazier, Nora Cummings; mother-in-law and father-in- law, Robbie and Tom Vickery, Sr., sister- in- Law, Dorothy Wright and her husband W. L. , brothers- in-law Tom Vickery, Jr. and James Knowles. Elmer is survived by his two daughters, Kathleen (and Jeff) Binion, Deborah (and Ricky) Marchman. He loved his role as a grandfather to Andrew (and Abbey) Binion, Brad (and Lori) Binion, Kendall (and Darbie) Marchman, Katy (and Steven) Sosebee, Abigail (and Travis) Strickland. His family includes 10 great grandchildren and their spouses. Others in his family are his sisters-in-law Louise Knowles and Wino Vickery. During his later years, Elmer found a close bond with his dear friend, Sarah Fey. Elmer’s life will be remembered joyfully in a service to be held on Wednesday, October 7, 2020 at 11:00 AM in the Historic Sanctuary of First Baptist Church Newnan which will be led by Dr. Jimmy Patterson and Lee Chitwood. Interment will be in Forest Lawn Memorial Park with honors. The family will receive friends on Tuesday evening from 6:00 PM – 8:00 PM at McKoon Funeral Home at 38 Jackson Street. In lieu of flowers, memorial contributions may be made to The First Baptist Church of Newnan. Online condolences may be expressed at www.mckoon.com.

On the morning of his 89th birthday, Elmer Ray Kendall attended the greatest birthday celebration ever, as he crossed the gates of Heaven and joined His Savior and family and friends that had predeceased him. Elmer was born on October 5th, 1931... View Obituary & Service Information

The family of Elmer Ray Kendall created this Life Tributes page to make it easy to share your memories.

On the morning of his 89th birthday, Elmer Ray Kendall attended...

Send flowers to the Kendall family.