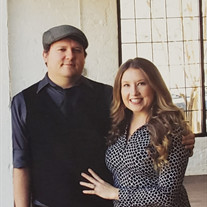 Eric Scott Patterson, “Erok”, passed away Thursday, August 6th, 2020 at Emory Long Term Acute Care Center in Decatur, Georgia after a hard fought battle with a brain and spinal cord infection. He and his wife’s faith in God throughout the journey were documented on Facebook and have been an inspiration to the communities of Newnan, Moreland and beyond. Many benefits were created in his honor including the recent 3-day “Erokathon” at The Alamo in Newnan. The overwhelming love and support Charlotte, Erok and the family have received is a tribute to what a kind, loving and entertaining man Erok was. A musician from an early age and a founding member of the band, Groove Stain, Erok later became a well known staple to the community of Newnan, Georgia by hosting trivia, open mic, karaoke and DJing at his favorite places, The Alamo and RPM. Throughout his life he used his experiences to guide and mentor younger musicians. Friends described him as “the most creative and talented person, and an incredible entertainer.” Erok was born on December 31, 1979 to Kathy and Bob Patterson of Panacea, Florida. He is survived by his wife of 8 years, Charlotte Dombrowski Patterson of Moreland, Georgia; his aforementioned parents; his sister, Jennifer Patterson McGaha and her husband Robert and their children, Arin McGaha Willitts and Gwen McGaha Hortman of Moreland, Georgia and a great-niece Lana; his in-laws, Lynn and Mike Dombrowski of Newnan, Georgia; sisters-in-law Andrea Dombrowski Pritchett (Ross) of Roswell, GA and Valerie Dombrowski McClung (Keith) of Columbus, Georgia. He is also survived by and voted “most hilarious uncle” by his youngest niece and nephews, Charlie and Lilla Pritchett of Roswell, Georgia and Curtis and Drake McClung of Columbus, Georgia. The family will receive friends and family on Sunday, August 16, 2020 from 12:00 - 2:00 PM at McKoon Funeral Home 38 Jackson St. Newnan, Georgia and will be following all social distancing guidelines. Condolences may be expressed to the family at www.mckoon.com. McKoon Funeral Home & Crematory (770) 253-4580.

The family of Eric S. Patterson created this Life Tributes page to make it easy to share your memories.

Send flowers to the Patterson family.