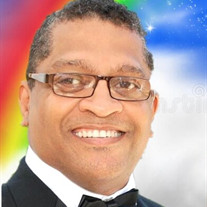 This born again Reverend Dr. Eric Owen Wilson was the 4th of 5 children born in the 1st Marriage to the late William Walter Wilson and Dorothy Joan Wilson nee Blake in Philadelphia PA. He was preceded in death by his father, 1 sister Lisa Ann Davis , Brothers Douglas and Avon aka Eddie Wilson. Eric was educated in the Philadelphia School system graduating from Widener Memorial in 1971 and going on to attend the Charles Morris Price School of Advertising and graduated in 1973. Eric accepted Christ as his Lord and Master a decade later. He went to found a prison ministry through his monthly magazine and newsletters that he wrote as well as presented tracts throughout the community for 20 years before meeting his Georgia Peach a Missionary from the U S Virgin Islands Reverend Laurice Simmonds on Facebook. The Lord lead Laurice to Eric by way of Farmville Multiple Chicken Coop Protest on the game. In person they met when Laurice was instructed to prayer walk Independence Square in Philadelphia where the declaration of independence is housed and Eric joined her as her 2nd person. Holy Spirit introduced them instructed Eric was intrigued so he asked Laurice for her mailing address to send Valentines flowers. Rather than renewing his lease Georgia they engaged in premarital counseling long-distance she in Georgia, he in Philadelphia over the phone with their counselor. They were married June 20. 2010 2 days before Laurice birthday in a Garden of Eden setting in Lieu Gardens in Florida. He continued in ministry to graduate 3 rd in his class at World Changers Bible School and on August 10, 2021 was promoted by the Lord with the distinctive honor of Doctor in Divinity. Online and and throughout Facebook accumulated followers worldwide and experienced the "Facebook Jail" to the surprise of his wife. He became the treasurer member of Caribbean Missions Outreach after the resignation of Mrs. Diana Avery and served as Minister of Helps until his passing on November 3, 2021. Throughout his life Eric overcame struggles and challenges with his health. He was born with a rare blood type that required that they drained his blood and they replaced it with A Positive which no longer being done scientifically based on development of science. He had several issues of the blood and those disorder. During the process he contracted cerebral palsy. At that time in 1953, the doctors did not give his mother much hope for a normal childhood. She was told that he may not live past the age of 10 and if he did, he would be wheelchair bound. God had other plans for Eric. At the age of four, he walked. At the age of eight, he spoke clearly due to speech therapy. In 1983, Eric took his place in the pulpit speaking the Words of God and he never stopped. He once said, "I thank my Heavenly Father, Son and Holy Spirit for rebuilding a man of faith in me and I am filled with joy and full of great expectation." He wrote that in his book, "Storms, Sunshine and a Rainbow" Volume I and Volume II. He is survived by his wife Rev. Laurice Simmonds-Wilson, his children Stephanie Wilson, Staci Smith (Lemar); Stephen Eric Wilson; mother Dorothy Wilson, his mother in law Maria T. Simmonds sister Deborah Marie Smart (Wille); his Step-Mother Agnes Wilson, his younger brother Paul, and sister January Wilson of Connecticut. Grandchildren: Emmanuel Wilson, Mykael Moore, Destiny Moore Jamaal Dickerson, Nevaeh Dickerson, Tyjuan Dickerson; Lemar Smith Jr., Inara Smith, Nylah Smith, Kylah Smith; Jamari Stephen Wilson and Jasir Marquise Wilson. Body of Believers Nationally and Internationally including; Fayette Family Church, Pastor Jerry Young in Fayetteville Georgia; the World Changing Nation of and CDMA Ministerial Association family founded by Dr. Creflo and Taffi Dollar. He also leave to mourn Pastor Garnet Mims, of Philadelphia. A wonderful community of aunts including Aunt Ruby Wilson of Penn land, uncles and cousins who knew and loved him dearly. Those who followed his online ministry will also miss his dedication and truths he wrote about turning their lives over to Jesus Christ. The funeral service celebrating the life Rev. Dr. Eric O. Wilson lived is Saturday, November 20, 2021, at 10:00 AM in the chapel of McKoon Funeral Home. McKoon Funeral Home & Crematory

This born again Reverend Dr. Eric Owen Wilson was the 4th of 5 children born in the 1st Marriage to the late William Walter Wilson and Dorothy Joan Wilson nee Blake in Philadelphia PA. He was preceded in death by his father, 1 sister Lisa Ann... View Obituary & Service Information

The family of Eric Owen Wilson created this Life Tributes page to make it easy to share your memories.

This born again Reverend Dr. Eric Owen Wilson was the 4th of...

Send flowers to the Wilson family.