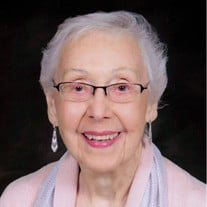 God allowed one of Newnan’s most beloved Earth Angels to retire on December 22, 2020. Ethel Bell Bruner passed away at her Wesley Woods home surrounded by caring, loving staff members and kind hospice professionals. She was 99 years old. Pandemic protocols did not allow her family members or countless friends to gather there, but all of them were with her in their hearts as they consoled each other from afar. Ethel’s angel-touches in Newnan began when she moved to town in 1950. She joined the First Baptist Church of Newnan, where she taught Sunday School for many years, was a leader in the Women’s Missionary Union and supported all outreach programs and church events, including NGO. Her ministry was not limited to the adults; Ethel was adored by the youth of the church as well. Whether she was hosting picnics for them at her home in Lake Hills or following their life journeys as they matured, they always knew she cared for them. Regardless of age or position, Ethel treated everyone she knew like family, loving each one on a deeply personal level and embodying the commandment of John 15:12. When anyone came to her for guidance, which happened often, she knew exactly what to say to give them the encouragement they needed with her trademark wisdom and humor. When she moved to Wesley Woods, she continued to lead devotionals and show love and concern for both residents and staff, even sharing her “sweet tooth” by making homemade peach ice cream once a year for the entire community! This incredibly kind, gifted, smart woman came from humble beginnings. Ethel was born on November 11, 1921, in Harris County, Georgia. A few years after her birth, her family moved to Phenix City, Alabama and later to Columbus, Georgia where her father worked as a skilled carpenter. During the depression in 1932, Ethel’s family moved to Ellaville, Georgia, where they farmed to help make ends meet. When the economy improved, Ethel moved back to Columbus. Upon graduation from Columbus Industrial High School, Ethel was hired at the F.W. Woolworth Company as a salesperson. There she met her future husband Virgil Bruner who was the assistant manager. They married in 1939. After working at Woolworth, Ethel became a switchboard operator at the Southern Bell Telephone Company. Virgil was soon transferred to Birmingham, Alabama for a short time and she found work at a redemption center for Octagon coupons. By year’s end, they returned to Columbus where she went back to work at the Telephone Company and Virgil became a sales representative for National Life and Accident Insurance Company. Throughout their marriage, their love for one another and their commitment to work hard were equally matched. Unfortunately, World War II created a new challenge for them. After the Pearl Harbor attack, Virgil felt called to make another change; he became a welder. They moved to Alliance Ohio where he helped make fuselages for Taylor Craft airplanes and Ethel went to work for Ohio Bell. After two years, they moved once again when Virgil went to work at Wainwright shipyards in Panama City, Florida. Undaunted, Ethel found work in the personnel office. Virgil was drafted into the Navy April, 1945, and Ethel returned to Columbus, Georgia. Their son David was born later that year while Virgil was stationed in Guam. After the war, Ethel and Virgil decided to launch a whole new life. In August of 1946, they opened two ladies retail stores, one in Phenix City and the other in Bibb City in Columbus. In 1950, they accepted a business opportunity in Newnan. They sold their two stores and moved with son David and their six-month-old daughter Rita to help manage Kersey’s retail store on Greenville Street. Two years later, they left Kersey’s to open their own business. They operated Bruner’s Ladies’ Ready-to-Wear until 1974, when Rita and her then husband George Giddings, Jr. took control of the business. After Ethel and Virgil retired from the store, they moved to Dunwoody, Georgia where Virgil sold vintage cars and Ethel, ever the career lady, took a job in the business office of the Food Mart Convenience Stores. Virgil passed away in 1981, and Ethel returned to Newnan to focus on what she enjoyed most – loving and serving others. She moved into the Wesley Woods Retirement Community in December, 1998, and lived there happily for twenty-two years. Although God has allowed Ethel’s angel body to retire, her angel spirit is still ever-present with her family and friends. Along with her parents, Ethel was preceded in death by her husband Virgil Bruner, her son David Bruner of Carrollton, her sister Ruth Bell French of Cumming and her infant brother Ernest Bell. She is survived by David Bruner’s wife Pat of Carrollton, daughter Rita Bruner Brown (David), of Senoia, her grandson Stephen Bruner of Kennesaw, her granddaughter Kirsten Giddings Beard (Bryan) of Dunwoody, her great-grandson Thomas Bruner, her great-granddaughters Morgan Bruner, Sarah Beard and Ashlyn Beard, her step-granddaughters Adi Brown of Moab, Utah, Julia Gaines McLeod (Brian) of Carrollton and her children Auston and Tucker and Abigail Brown Endres (Jeff) of Senoia and her children Jordan Cole and Madeline Cole and several dear nieces, nephews and cousins. A private graveside service will be held Sunday, December 27, 2020. Memorials may be sent to Newnan First Baptist Church, 15 West Washington Street, Newnan, Georgia 30263 or Wesley Woods Foundation, Newnan Employee Appreciation Fund, 1817 Clifton Road NE, Atlanta, GA 30329. Condolences may be expressed to the family online at www.mckoon.com. Mrs. Bruner's funeral will be available to view online on Monday, December 28, 2020 on the McKoon website. McKoon Funeral Home & Crematory 770-253-4580

God allowed one of Newnan&#8217;s most beloved Earth Angels to retire on December 22, 2020. Ethel Bell Bruner passed away at her Wesley Woods home surrounded by caring, loving staff members and kind hospice professionals. She was 99 years... View Obituary & Service Information

The family of Ethel Bruner created this Life Tributes page to make it easy to share your memories.

God allowed one of Newnan’s most beloved Earth Angels to retire...

Send flowers to the Bruner family.