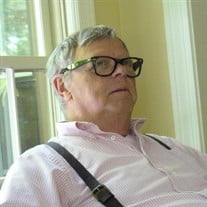 Frank A Bridges died on April 23, 2021, at his residence in Wesley Woods of Newnan, Georgia. Frank was born in Newnan, on May 7, 1940. He grew up in Newnan on Buchanan Street. He graduated from Newnan High School, Emory at Oxford, attended Emory, and then transferred to University of Georgia, where he received his degree. After graduation, Frank joined the Georgia Army National Guard, where he served as an Army cook. He was employed by the Life of Georgia Insurance Company in Atlanta, where he worked until his retirement. During this time Frank lived in Marietta for over 40 years. As he grew older Frank chose to move to Wesley Woods of Newnan, where he would be closer to his sister and brother-in-law, Carol and William Starnes. His time there was short, about 2 years, but he never regretted his choice to return to his hometown. He held Wesley Woods in high regard, and made many new friends there. Frank was a quiet, intelligent man, with a quick wit. He loved the outdoors, the animals and the wildflowers. He was a skilled photographer, with a variety of cameras and photo printing equipment. Discovering a new wildflower and capturing it on film was a joy to him. He had an extensive collection of wildflower photos. Frank was a member of the Georgia Botanical Society and the Chattahoochee National Park Conservancy. He walked many miles as a park volunteer, picking up trash and taking pictures. Frank was a character that you could not help but admire. Frank was preceded in death by his parents, Frank Wynn and Martha Amis Bridges, and is survived by his sister, Carol (William) Starnes, one niece and two nephews, and five great nieces and nephews. As simple and uncomplicated as his life was, Frank made a notable impact on all of us. There is an ache in our hearts, and we shall miss him dearly. Frank will be interred in the Bridges family plot at Oak Hill Cemetery. His service will be graveside on Wednesday, April 28 at 11am, Rev Matt Sapp officiating. In lieu of flowers, please make memorial contributions to the Chattahoochee National Park Conservancy and the Georgia Botanical Society. Condolences may be expressed to the family online at www.mckoon.com. McKoon Funeral Home & Crematory 770-253-4580

Frank A Bridges died on April 23, 2021, at his residence in Wesley Woods of Newnan, Georgia. Frank was born in Newnan, on May 7, 1940. He grew up in Newnan on Buchanan Street. He graduated from Newnan High School, Emory at Oxford, attended Emory,... View Obituary & Service Information

The family of Frank A. Bridges created this Life Tributes page to make it easy to share your memories.

Send flowers to the Bridges family.