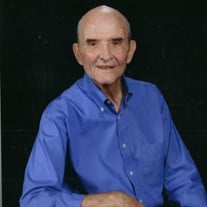 God tells us in Hebrews 1:3 ”He is the radiance of the glory of God and the exact imprint of his nature, and he upholds the universe by the word of his power. After making purification for his sins, he sat down at the right hand of the Majesty on high.” On the morning of Monday, May 24, 2021 Frank Hiram Buchanan left his earthly home with his family surrounding him and he took his seat at the right hand of the God he had been so faithful to during his earthly journey. Hiram, Big H, was born Tuesday, August 1, 1938 in LaGrange, GA to the late Frank M. Buchanan & Bessie Calhoun Buchanan. His family moved to Newnan when he was still a young child and Hiram attended Coweta County Public Schools. His life was filled with faith, family, and fellowship. Hiram was first and foremost a Christian who made use of his God given talents. He was known for his love of singing and was the choir director at Community Baptist Church from 1967 to 1978. He and his beloved wife, Rudine made certain all their children were present at church each Sunday morning. Their steadfast faithfulness to their Lord and church was passed on to their children. His daughter, Leesa, was gifted her father’s singing talent and their son, Craig, was gifted Hiram’s love of people and helping others. Hiram and his family moved their letter to Unity Baptist Church in 1995 where, until his health prevented, he could be found singing in the choir. After his faith, his family was his priority. Even after the death of two of his children, Gail & Jeff and his grandson, Donald Lowery, Hiram held firm in God’s promise of “be strong and courageous. Do not fear or be in dread of them, for it is the Lord your God who goes with you. He will not leave you or forsake you.” Hiram also had a love of sports. Even before having children himself, he could be found on the field coaching youth baseball and football. When not coaching and encouraging others, he could be found playing centerfield on the Bonnell softball team. His teammates marveled at his ability to easily throw from centerfield to home plate in plenty of time for the catcher to tag the runner. He was proud of his Bonnell team winning the State Championship. The family will greet friends beginning at 1:00 PM Saturday, May 29, 2021 at his beloved Unity Baptist Church. The memorial service will follow at 2:00 PM in the sanctuary of the church with Pastor Danny Wilson officiating. Rather than flowers, the family respectfully requests memorial contributions to Unity Baptist Church, 311 Smokey Road, Newnan, GA 30263. Condolences may be expressed online at www.mckoon.com Survivors include his wife of nearly 64 years, Rudine Cheeves Buchanan; children, Leesa Buchanan Bates, Craig Buchanan; brother, Dudley Buchanan; 15 grandchildren; 12 great-grandchildren; and extended family. McKoon Funeral Home & Crematory (770) 253-4580

God tells us in Hebrews 1:3 &#8221;He is the radiance of the glory of God and the exact imprint of his nature, and he upholds the universe by the word of his power. After making purification for his sins, he sat down at the right hand of the... View Obituary & Service Information

The family of Frank Hiram Buchanan created this Life Tributes page to make it easy to share your memories.

Send flowers to the Buchanan family.