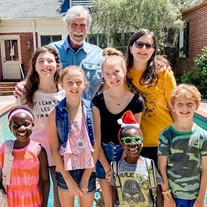 Frank Gary Hampton Dec 17, 1942-Aug 19,2020 Frank Gary Hampton, aged 77, passed away on August 19, 2020, from acute respiratory failure as a result of the COVID-19 pandemic. He was born on December 17, 1942, in Lawrenceburg, TN, to the late Frank Criswell Hampton and Mary Ella Spencer Hampton. Gary graduated from Lawrence County High School in 1960. He started college at the University of North Alabama and then enlisted in the US Army to fight in the Vietnam War. Gary was awarded the Army Commendation Medal in 1966 for Meritorious Service in Vietnam. After his Army service, he completed his studies by obtaining a BS in Business Administration at The University of Tennessee in 1969. He spent his entire working career as an accountant in Georgia and Tennessee. Gary was highly intelligent and amazingly funny! He could always make everyone laugh with his wit and sense of humor. He loved football and baseball - mostly the University of Tennessee Volunteers and the Atlanta Braves - and enjoyed being able to go to live games. Mostly he loved people - being with them and serving them. In his later years, he was dedicated to helping others, from doing civic work with The Lions Club and actively participating at the Pulaski Street Church of Christ (Lawrenceburg, TN) and St Mark’s Episcopal Church (LaGrange, GA) with a special interest in their food bank/community feeding ministries. But perhaps most of all was his joy in his renewed faith, his 7-year sobriety, and the community he found with his local AA chapter. He was a renewed man - his family was so proud of him and his AA community adored him (Hi, Gary!). Gary was married three times: first and last to Martha Koger Hampton, who proceeded him in death in May 2020. Gary had a daughter with and a stepdaughter through Martha. He was also married to Christina Marx Hampton with whom he had 3 sons. Gary is survived by daughter Camille Holt Hampton Rogers and her husband Jeff Rogers; son Mark Spencer Hampton; son Andrew (Drew) Barrett Hampton; son Alan (Mac) Lyons Hampton; stepdaughter Amelia Koger Richardson Davis and her husband Jeff Davis; sister Rosemary Hampton Koger and her husband John Koger, Sr.; and sister Cindy Hampton Lappin and husband Bill Lappin. He is also survived by seven grandchildren: Ruth Rogers, Rachel Rogers, Georgia Davis, Bentley Davis, Eneless Davis, Watson Davis, and Jonas Davis. Due to current restrictions from COVID-19, the family will hold private remembrances. In lieu of flowers, the family asks that donations go to one of the following organizations in his honor: St. Marks Episcopal Church https://www.stmarkslg.org/giving/ or West Georgia Hospice http://www.westgeorgiahospice.org. Condolences may be expressed to the family online at www.mckoon.com. McKoon Funeral Home & Crematory 770-253-4580

The family of Frank Gary Hampton created this Life Tributes page to make it easy to share your memories.

Send flowers to the Hampton family.