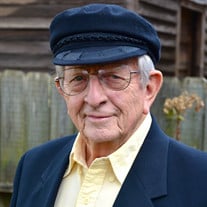 Frank P. Odom, passed away Wednesday, December 2, 2020. He was born on May 13, 1929 in Turin, Georgia. He was the oldest of eight children born to Loyd and Florence Odom. He graduated from Starr High in 1947. After graduation, he farmed with his family and worked at Hollberg's in Senoia, GA. In 1950 he joined the U.S. Air Force. He did his training at Hamilton Air Force Base in California. He was stationed at Goose Bay, Labrador most of his time in the Air Force. He was a staff sergeant and inventory control specialist. He was honorably discharged from the Air Force in 1954. When Frank returned to home he initially worked on the family farm. He later attended Georgia Tech before embarking on a business career. He worked at B.F. Goodrich in Atlanta, GA and Birmingham, Alabama. This experience was extremely helpful when he decided to go into business for himself. Frank along with his brother William Odom and brother-in-law Arthur W. Hudson founded Hudson & Odom Tire Co. in Kansas City, MO. They opened the doors in 1962. Frank was Vice President and sales manager for them and traveled all over the U.S. In the early 1970’s, they opened a second retread location in Fullerton, CA. They later opened a rubber plant (Pacific Rubber) in Irvine, CA. Hudson & Odom was the largest retreader of earth mover tires that made their own rubber in the United States. They sold Hudson & Odom in 1980 and after consulting for the new owners, Frank retired in 1981. While Frank was starting his business career, another wonderful thing was happening. In early 1960 he was introduced to Sherry Snow. A few months later Frank proposed to Sherry at The Varsity in Atlanta. They were married on June 25, 1960 and spent 60 years together. During his retirement Frank had many hobbies that he loved and enjoyed. He was always fascinated with trains and made over 70 train trips, many with family and friends. One of his fondest memories was when he was invited to ride with the engineer at the helm as the train traveled over 100 miles per hour. He was an avid golfer and loved sailing. He owned several sail boats and power boats. Much of Frank's time on the water was spent in Florida. Frank traveled to 49 states and went out of the country on numerous occasions. Frank was the life of any gathering and loved telling jokes. In a recent interview, after all of his travels and accomplishments, Frank stated "There is no place like Turin." He was preceded in death by his parents Loyd and Florence Odom, brother Harry Odom (Katie), sister Jeannette Odom Harris (Judson), brother-in-law Arthur Weston Hudson, sisters in law Shirley Crawford Odom and Becky Burnette Odom. Frank is survived by his wife Sherry Odom, brothers William Odom, Dan Odom and Roy Odom (Trouba), sisters Josephine Odom Hudson and Nancy Odom Christopher (Billy) and many nieces and nephews and great nieces and great nephews. A graveside service will be held at 11:00 am on Saturday, December 5, 2020 at Turin Memorial Gardens. In lieu of flowers, donations may be made to Turin Baptist Church P.O. Box 99 Turin, GA 30289. Condolences may be expressed at www.mckoon.com. McKoon Funeral Home & Crematory | 770-253-4580

Frank P. Odom, passed away Wednesday, December 2, 2020. He was born on May 13, 1929 in Turin, Georgia. He was the oldest of eight children born to Loyd and Florence Odom. He graduated from Starr High in 1947. After graduation, he farmed with... View Obituary & Service Information

The family of Frank Preston Odom created this Life Tributes page to make it easy to share your memories.

Send flowers to the Odom family.