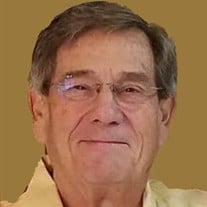 Mr. George Andrew Christenberry, Jr, 73, entered into rest Monday, October 26, 2020. Mr. Christenberry was a native of Greenville, South Carolina. He was a national and state-level leader in public sector telecommunications. He began his career in telecommunications as a lineman at General Telephone of the Southeast and became a manager where he served as a state-wide communications consultant for that company. In 1973, he began working for the State of Georgia’s Division of Administrative Services (DOAS). After a series of upward career path moves at DOAS, he became the Deputy Commissioner of DOAS for all telecommunications services operated by the State of Georgia. This included all telephone, cellular, satellite, paging, networking, and law enforcement radio services within the state. During this time of leadership, Mr. Christenberry originated and led the establishment of GSAMS, a state-wide distance learning/teleconference network, and the state’s first telemedicine network. At DOAS, he supervised a staff of 285 employees and managed a budget over $100 million. In 1988, he was named Georgia state government manager of the year by Governor Joe Frank Harris. He further assisted his home state of Georgia by serving on the Georgia Information Technology Policy Committee, the Georgia Center for Advanced Technology, the Atlanta Olympic Organizing Committee, and many other national and state organizations. During 1996 to 2001, Mr. Christenberry was the vice president of government sales at Intermedia Communications, Inc., where he provided consulting and assistance to several states, including Georgia, Florida, Louisiana, and New York. During 2004-2008, he served as senior director for business development for state and local government at Verizon (formerly MCI) Business, which covered public sector services across thirty-two states. Mr. Christenberry was a founding member of the National Association of State Telecommunications Directors and served in several leadership roles in this organization, including being President in 1987. He helped lead their committees in joint procurement and strategic planning. He received this organization’s lifetime honorary membership award in 1996. In retirement, Mr. Christenberry continued to enjoy his life-long hobby of working with and rebuilding vintage automobiles. He also enjoyed hunting and fishing in locations across the United States. Many of his friends enjoyed these sportsman activities with him. Family members include a daughter: G. Lynn Christenberry Knorr (Terry), Taylors, South Carolina; a grandson: Dempsey Knorr, Taylors, South Carolina; a sister: Becky Christenberry Williams of Evans, Georgia; a brother: John Reid Christenberry (Karen) of Hoschton, Georgia; and numerous nephews and nieces. A COVID-limited private interment service will be held at First Baptist Church of Augusta with the Rev. David Hughes officiating. Interment will be in the Church Memorial Garden.

The family of George Andrew Christenberry created this Life Tributes page to make it easy to share your memories.

Send flowers to the Christenberry family.