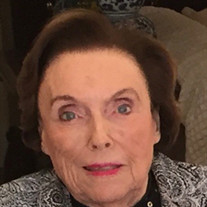 Gloria Irene Donnelly Murphree, of Newnan Georgia passed from her earthly life on December 5, 2020 at the home of her daughter due to the complications associated with dementia. She was born September 18, 1929 in Montgomery, Alabama, and was the only child of the late Renie M. and Thena Story Donnelly. In addition to her parents, Gloria was predeceased by her husband James William Murphree to whom she was married in 1954. Gloria and Bill were enthusiastic travelers; this being made most convenient by his employment at Eastern Airlines as a Captain. The Murphrees had a profound compassion for God’s four-legged creatures. Countless numbers of injured and forsaken animals would be gathered up and taken to their farm outside Newnan until a new home could be found for them. The Murphrees passed their love of helping others, both animal and human down to their daughters and grandchildren. As matters well taught will do, their progeny continue to share that same passion. Mrs. Murphree enjoyed volunteering her time to her community. She worked many years as a "Pink Lady" for Newnan Hospital's Auxiliary. She also enjoyed preparing and delivering meals for Central Baptist Church's Feeding Our Friends program. She enthusiastically served as a parent volunteer at both The Arlington School and The Heritage School. She was a lifelong, avid reader. Her favorites were biographies and autobiographies. Gloria instilled that love of reading and respect for the English language into her daughters and grandchildren. Art became another creative outlet for her after she and Bill made their home in Newnan in 1972. After her husband's retirement they enjoyed many days together with family at their lake home on Lake Martin in Alabama. The times Gloria most cherished in life were the times she spent with her three beloved grandchildren. She became “Nana” to each of them and their friends. She had a great imagination and a wry wit, making up magical, detailed stories for them they will remember forever. She is survived by her daughters, Lynn Murphree Finney and Susan Murphree Ebersbach, and her beloved son-in-law, Randy, all of Newnan; her oldest grandson, John Ebersbach and his wife, Morgan, of Vinings, Georgia; her granddaughter, Gloria Ruth Finney of Nashville, Tennessee and Macon, Georgia; and her youngest grandson, Richard Ebersbach, of Newnan. She also leaves behind an extended family of dear nieces and nephews. Her life was blessed by her old friends and loving new friends during her last few years at Wesley Woods of Newnan, and the loving caregivers God gave her through the 8th floor Piedmont Newnan Hospital staff, Sacred Journey Hospice, and bedside angels Barbara, Kim, Mary B. and Janette. Gloria’s life will be remembered and celebrated in a service to be held on Tuesday, December 8, 2020 at the graveside at Historic Oak Hill Cemetery. Serving as pallbearers will be Randy Ebersbach. John Ebersbach, Richard Ebersbach and John Hancock. Dr. Joel E. Richardson will officiate. Visitation will be at McKoon Funeral Home at 38 Jackson Street beginning at 2:30 PM to be followed by the graveside service at Oak Hill. Online condolences may be expressed at www.mckoon.com. McKoon Funeral Home 770-253-4580.

Gloria Irene Donnelly Murphree, of Newnan Georgia passed from her earthly life on December 5, 2020 at the home of her daughter due to the complications associated with dementia. She was born September 18, 1929 in Montgomery, Alabama, and was... View Obituary & Service Information

The family of Gloria Donnelly Murphree created this Life Tributes page to make it easy to share your memories.

Send flowers to the Murphree family.