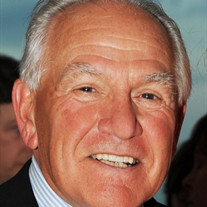 THE MEMORIAL MASS HAS BEEN CHANGED TO MONDAY, JUNE 20, 2022 AT 11:00 AM AT ST. MARY MAGDALENE CATHOLIC CHURCH. Harold Vincent Barry ("Hal"), 82, passed away on May 31st, 2022 at Piedmont Hospital in Newnan, Georgia. Hal, the self-proclaimed "small town Iowa farm boy", was born on April 23rd, 1940, to Ray and Ann Barry in Fairbank, Iowa. Hal was the second eldest of 6 children and attended Iowa State University where he subsequently met his beautiful wife of 59 years, Linda Kunkle Barry. Hal and Linda moved to Atlanta in 1969, after a brief stint in Jackson, Mississippi, to pursue his career in real estate finance and development. Hal was well known for his passion and love of real estate. He was the President and cofounder of several real estate brokerage/development companies in Atlanta, most notably, Portman Barry Investments and Barry Real Estate Companies. He quickly became known as one of the visionaries of real estate development and had a massive impact on the landscape all over the southeast. Hal's early successes included the financing of Perimeter Center, Cumberland Office Park, the John Portman's Peachtree Plaza Hotel and Merchandise Mart, the Georgia Pacific Building, Interstate North Office Park, and many Ritz Carlton hotels. Hal's development projects included over 4.5 million square feet of projects, including Northpark Town Center, Riverwood, and Allen Plaza in downtown Atlanta, and over 30 office buildings around the Southeast. The local real estate community is filled with former Barry employees who have become shining stars on their own merit, and every one will attribute at least a part of their success to the mentoring and leadership of Hal Barry. Hal and Linda followed their love of the country and moved permanently to their horse farm in Newnan, Georgia, in 1994, where they developed their passion for horses and Fox Hunting. Hal founded the Bear Creek Hounds hunt club in 2001 and rode as Master of Foxhounds for many years. It gave him tremendous joy to mentor the new riders as they became more accomplished and earned their colors. Hal and Linda conducted fox hunts twice a week, and his hunt membership and his horse community gravitated to his zest for life and his passion for the sport. Hal lived life to the fullest, always wanting everyone to have fun, and pursue their dreams to the fullest extent. Hal's love of horses and animals extended beyond his farm as he chaired the Atlanta Steeplechase for many years and continually pushed to make it bigger and better for all who attended. Hal was addicted to the "thrill of the chase," whether it was pursuing a new business venture, or chasing down his prey via horseback. "Tally-Ho!", he would scream when he found a new business lead or his hounds locked on to a scent. He was driven by the Theodore Roosevelt quote: "Its not the critic that counts", and had it framed in his office for everyone to see. Being the ultimate optimist, he was never going to be held back or told that he couldn't do anything. He was a respected and determined business leader, the consummate husband, father, grandfather, and compassionate friend. Hal and Linda have been a part of the Catholic Church in the local communities in both Atlanta and Newnan. Hal furthered his commitment to the church by serving on the board of the real estate committee for the Archdiocese. You will be dearly missed but never forgotten Big Hal Barry. Hal is survived by his beautiful wife, Linda and their 3 children: Jean Barry Underwood(Will), David Lee Barry and James Vincent Barry of Atlanta. " Papa" is also survived by seven grandchildren: Katy Underwood Phillips (Wade), Emmett Underwood IV, David James Underwood, Connor James Barry, Adrianna Lee Barry, Brandt Walker Barry and Harold Vincent Barry II. Hal is also survived by two sisters, Eleanor Buzynski (John), Ramona Brumley (John), his sister- in-law Diane Gerringer Barry(Phillip) and several nieces and nephews. He was predeceased by his parents Raymond and Ann Barry, his sister Patricia Smith and his two brothers Phillip Barry and Roger Barry. A memorial service will be held on Monday, June 20th, 2022 at 11:00am. at Saint Mary Magdalene Catholic Church. 3 Village Road, Newnan Georgia 30265. Following the service there will be a reception for close friends and family at Bear Creek Farm, 1539 Bear Creek Road, Moreland, Georgia 30259. In lieu of flowers, the family suggest donations to Bear Creek Hounds. 855 Bear Creek Road. Moreland, Georgia 30259 or Saint Mary Magdalene Catholic Church. www.smmcatholic.org. Condolences may be expressed online at www.mckoon.com McKoon Funeral Home & Crematory (770) 253-4580

THE MEMORIAL MASS HAS BEEN CHANGED TO MONDAY, JUNE 20, 2022 AT 11:00 AM AT ST. MARY MAGDALENE CATHOLIC CHURCH. Harold Vincent Barry ("Hal"), 82, passed away on May 31st, 2022 at Piedmont Hospital in Newnan, Georgia. Hal, the self-proclaimed... View Obituary & Service Information

The family of Harold "Hal" Vincent Barry created this Life Tributes page to make it easy to share your memories.

Send flowers to the Barry family.