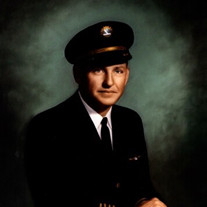 Captain Harry Anderson took his final flight on September 9th 2021 in Atlanta, Ga. He left on time and arrived on time into the presence of his Lord and Savior! He was born October 23, 1923 in Denison TX to John Anderson and Dorothy Rose Grable Anderson. In addition to his parents; he was preceded in death by his wife Leola Anderson, brother; John Anderson, son: Harry Robert (Bob) Anderson Jr. He is survived by daughters; Sandra Anderson Suggs(Robert), Rosie Anderson Mayer(Robert), sons: Paul Wayne Anderson(Karen), James Edward Anderson(Sara), 11 grandchildren, and 9 great-grandchildren. Harry graduated from Bay City High School in TX. Upon completion of studies in blue-prints and sheet metal; He and his brother John moved to San Diego CA to work in the aircraft industry for the war effort for WWII. Shortly after He joined up in the Army Air Corps where his love of flying took off. In 1945, Harry married his first wife, Winnie Gilmore Anderson, mother of Bob, Sandra and Rosie. Harry began his career as an airline pilot in the early 1950's and received his 30 year pin just before full retirement. February 22, 1961 He married Leola Johnson and enjoyed 57 years together until her passing in 2019. Harry and Lee moved to Newnan GA in March 1966 upon completion of their home in Lakehills on Magnolia Drive. It was of course only half a mile to the Newnan Country Club where Harry's passion for golf was met weekly until age 88. Harry was very active in the Fellowship of Christian Airline Personnel (FCAP), and was very involved with Christian Financial Concepts. He founded Grace Ministries, and was a founding member of Grace Community Fellowship. Flying and golf paled in comparison to his passion for following Christ and seeking His will in all decisions of life. That was a way of living he desired to share with his family, friends and all he met. God through salvation in Christ, indwelling the believer and leading their life to all fullness, joy and peace; with eternity in heaven with the Lord to follow this life on earth. Funeral services will be held at Grace Community Fellowship on Saturday, September 18, 2021 at 2:00 PM with the family receiving friends at from 1:00 PM until service time. Online condolecnes may be expressed at www.mckoon.com McKoon Funeral Home and crematory 770-253-4580

Captain Harry Anderson took his final flight on September 9th 2021 in Atlanta, Ga. He left on time and arrived on time into the presence of his Lord and Savior! He was born October 23, 1923 in Denison TX to John Anderson and Dorothy Rose... View Obituary & Service Information

The family of Harry Robert Anderson created this Life Tributes page to make it easy to share your memories.

Send flowers to the Anderson family.