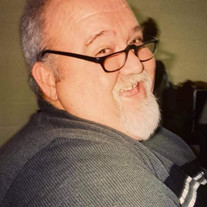 Hubert “Hub” John McGlothin, 74, died in Newnan, Georgia, on Sunday, February 14, 2021, after a terminal illness. Hub was born on September 21, 1946, in Grosskrotzenburg, Germany, to Glen Bernard McGlothin and Mathilde Powarzinsky McGlothin. His family moved from Germany to Ferriday, Louisiana, which became their family’s lifetime hometown. Hub enlisted in the United States Navy at age 17 and retired as a Senior Chief Hospital Corpsman for his 26-year career. He was highly decorated and served with valor during his two tours of duty in Vietnam and in many countries around the world. He was married to Gail Ward McGlothin in 1970. After retiring from the Navy, Hub graduated from Holy Cross College in 1991 with a Bachelor of Science in education. He went on to teach and coach in Louisiana and Texas for more than 20 years. Hub is survived by his wife, Gail McGlothin; his children, Mika McGlothin Rooney, April McGlothin-Eller (Vince), and Jake McGlothin (Robin). He is also survived by his grandchildren Fireman Jonathan Rooney USCG, Colin Rooney, Julian McGlothin-Eller, Zemery McGlothin-Eller, Mack McGlothin, and Stella McGlothin. Hub is survived by his brother, Glen McGlothin (Elizabeth) and his children. Hub is also survived by his bonus daughters, Ne’Cole Mullins, Alisa Everett, and Jessi Woody and their children. Hub was predeceased by his parents, Bernard and Hilde McGlothin, and his brother, Kurt McGlothin. Memorials for Hub will be held at a later time. Condolences may be sent to Gail McGlothin at 10 Picton Ct, Sharpsburg, GA 30277. Memorial gifts in his honor may be made to Wellroot Family Services, 1967 Lakeside Pkwy, Ste 400, Tucker, GA 30084 or online at www.wellroot.org/give-now. Condolences may be expressed at www.mckoon.com. McKoon Funeral Home & Crematory | 770-253-4580

The family of Hubert "Hub" John McGlothin created this Life Tributes page to make it easy to share your memories.

Send flowers to the McGlothin family.