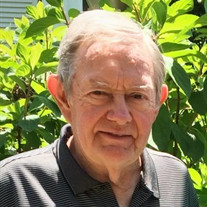 James (Jim) Russell Bice, beloved husband, father, and Pop Pop, passed away on December 26, 2021, at the age of 77, surrounded by his loved ones who are left to cherish his memory. Jim was born on October 6, 1944, in Clarksburg, West Virginia, to the late Laurence Russell Bice and Helen Burnett Bice. The family eventually settled in Lake Worth, Florida, and in 1965, Jim entered the United States Air Force where he learned the craft of photography. He was assigned to the White House Photo Lab during the Lyndon B. Johnson administration and was awarded a Presidential Service Badge. While working in Washington, D.C., Jim met and married Judith (Judy) Farley Bice; they had one daughter, Stephanie, before moving to the suburbs of Atlanta. Jim spent the remainder of his career in commercial photography, working in labs in downtown Atlanta and on the city's outskirts. He was an extremely hard worker who took pride in what he did, often pointing out displays in places like Hartsfield-Jackson Airport that he had helped produce. In spite of working so much, Jim found time to pursue some of his favorite hobbies, including fishing and traveling. From a young age Jim loved classic cars and devoted a great deal of time to attending auto shows and races and restoring cars of his own. As much as he liked his work and his hobbies, Jim loved his family more. His family meant more to him than anything, and he went to great lengths to ensure they all knew how proud he was of them and how much he loved them. In retirement he had the opportunity to be a loving and doting Pop Pop to his one granddaughter, Isabella, a calling he treasured above all else. Jim is survived by his wife of 53 years, Judith (Judy) Farley Bice; daughter, Stephanie (David) Trumble; granddaughter, Isabella Herring; brothers, David (Shirley) Bice, and Richard (Wendy) Bice; sister-in-law Barbara (John) Mattingly; and four nieces and nephews. The family held a private memorial service December 30, 2021, at McKoon Funeral Home with Chaplain Bob Lawrence (retired) of Woodward Academy officiating. A celebration of life will be held in the spring. Online condolences may be expressed at www.mckoon.com McKoon Funeral Home and Crematory 770-253-4580

James (Jim) Russell Bice, beloved husband, father, and Pop Pop, passed away on December 26, 2021, at the age of 77, surrounded by his loved ones who are left to cherish his memory. Jim was born on October 6, 1944, in Clarksburg, West Virginia,... View Obituary & Service Information

The family of James Russell Bice created this Life Tributes page to make it easy to share your memories.

Send flowers to the Bice family.