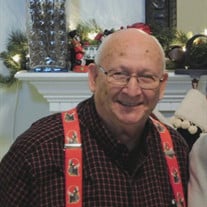 Mr. James Richard Crow, 86, of Newnan, formerly of Miami, Florida passed away Saturday, April 2nd, 2022 at Magnolia Senior Living. He was born May 31, 1935 in Ray City, Georgia to the late Henry Audley Crow and Nina Juanita Crow. Richard grew up in Ray City Georgia and was a graduate of Miami Jackson Senior High. He was a proud graduate of Miami Dade Community College. He was a veteran of the U.S. Army. After the army, he worked in the banking industry and the retail business. He retired from Belk and began his third career as a grandad in 1999. He was a longtime member of the Second Baptist Church of McDonough. After moving to Newnan, he became a member of East Newnan Baptist Church. The funeral is Wednesday, April 6th, 2022 at 12 o'clock at McKoon Funeral Home, 38 Jackson Street, Newnan, Georgia with Pastor Frank Powers. The visitation is Wednesday morning between 11:00 am and 12:00 pm at McKoon Funeral Home, 38 Jackson Street, Newnan. Rather than flowers, the family requests memorial contributions to East Newnan Baptist Church, 14 Pearl Springs Trail, Newnan, Georgia 30263. Survivors include his wife, Laura Joan Crow; son, James "Jimmy" Crow and wife Jennifer Land Crow of Newnan; and grandchildren Jackson Daniel Crow of Newnan, Jordan Wayne Crow of Newnan. Condolences can be expressed online at www.mckoon.com. McKoon Funeral Home & Crematory (770) 253-4580

The family of James Richard Crow created this Life Tributes page to make it easy to share your memories.

Send flowers to the Crow family.