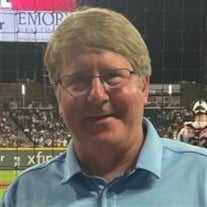 James "Jim" Benjamin Hutchinson III, 55, of Newnan, Georgia passed away peacefully on Wednesday, March 16, 2022, at his home after a valiant battle with cancer. He was born June 19, 1966, in Newnan, Georgia to Jane Hutchinson Arnold and the late Jimmy Hutchinson. Jim was affectionally known as Hutch by his closest friends. He grew up in Senoia and was a 1985 graduate of Newnan High School where he lettered in football and soccer. He was a member of the Sigma Alpha Epsilon fraternity at the University of Georgia and graduated from the University of West Georgia. Throughout high school and college, he worked at Hutchinson Hardware in Senoia; he was proud to earn enough money in high school to buy his all-time favorite car- a 1966 Mustang. He continued to work alongside his dad at the hardware store after college graduation and worked there for almost thirty years. After the family business sold, he began his career with Iron Planet which became Ritchie Brothers. Hutch can best be described as "all in"- fully committed to family, friends, and a good competition. He was a guy's guy who was a dominant clay shooter and a keen hunter. Although he loved a good shoot, Hutch really loved the social aspect of hunting even more. He developed lifelong friendships with fellow hunters and with the incredible women some of these men married; these men and women were like brothers and sisters to him. He also enjoyed dirt track racing, snowboarding and poker. Fellow poker players have shared that he was a patient poker player who lulled you into a mistake every time. Although Hutch had many passions, his greatest joy was his son, Jay, who he adored; he shared his heartfelt pride of the accomplishments and stages of Jay's life to anyone who would listen. He absolutely loved spending quality time with Jay and was honored to share his passion for hunting. The Celebration of Life service will be Saturday, March 19, 2022, at 2 o'clock at Senoia United Methodist Church with Dr. Harry Barrow and Dr. Jim Ellison officiating. The family will receive friends on Friday evening between 6-8pm at McKoon Funeral Home, 38 Jackson Street, Newnan. Rather than flowers, the family requests memorial contributions to Coweta Samaritan Clinic or Senoia United Methodist Church. Survivors include mom, Jane Hutchinson Arnold and husband Ralph of Senoia, GA; son, James "Jay" Benjamin Hutchinson IV and his mother Melissa Deas of Kansas City, KS; sister Beth Hutchinson Tripp (Woody) of Newnan, GA; niece Mary-Margaret "Maggie" Lewis Drake (Solomon) and great-niece Poppy Joy Drake of Suffolk, VA; nephews James "Hutch" Hutchinson Tripp and Andrew "Willis" Tripp of Newnan, GA. He is preceded in death by his father, Jimmy Hutchinson, grandparents J.B. and Kathleen Hutchinson and Howard and Gold Wilkinson. Even though Hutch had been dealt a bad hand with cancer, he never complained. His positive attitude, bright grin and quick wit remained with him until the end. The family is grateful to his dearest friends who supported him after his cancer diagnosis. Special thanks to his lifelong friend and incredible hospice nurse, Kim Odom Stephens, of Brightmoor Hospice. Condolences can be expressed online at www.mckoon.com. McKoon Funeral Home & Crematory 770-253-4580

James "Jim" Benjamin Hutchinson III, 55, of Newnan, Georgia passed away peacefully on Wednesday, March 16, 2022, at his home after a valiant battle with cancer. He was born June 19, 1966, in Newnan, Georgia to Jane Hutchinson Arnold and the... View Obituary & Service Information

The family of James "Jim" Benjamin Hutchinson, III created this Life Tributes page to make it easy to share your memories.