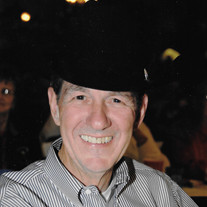 James (Jim) Howard McCool March 1, 1939 - August 26, 2021 Originally from Rome, GA. He graduated from Rome High School in 1957. Jim enlisted in the United States Air Force and left for basic training the day after graduation. In the Air Force Jim became a radar technician serving during the early years of the Vietnam War. His patriotism for this country continued until his death. His skills obtained during his services in the Air Force led to a civilian life as Computer and Electronics Technician. Jim retired from Hitachi Sales Corporation of America in 1998 as the National Service Manager. He received numerous awards for his work as a member of the congressional board of the National Electronic Service Association. In 1966 he met and married the love of his life Carolyn Hulsey McCool. They were married for over 55 years. Jim often quoted George Jones when referring to his death as when "he stopped loving her today". Jim is survived by his loving wife, daughter Lisa McCool Vandiver (Bill Vandiver); his granddaughters Autumn Reid (Chad Reid), Hunter Vandiver; great grand dogs Rowdy and Meto; sister-in-law Jane McCollum McCool; brothers-in-law (loved like brothers) Dennis Hulsey (Suzanne), Barry Hulsey, Chuck Hulsey (Sherry); and sister-in-law Sandie Hulsey. His children from out of state are; Mike McCool (Pennsylvania) Regina Lang (New Hampshire) and Vickie Ashmead (Florida). In addition, he had several nieces and nephews he loved and enjoyed watching them grow up. Jim was preceded in death by his parents Henry and Eva Mae McCool; brothers Henry Lee McCool and Jerrell Wynn McCool; brother-in-law Mike Hulsey and sister-in-law Brenda Hulsey. Jim was always serving the communities he lived in through organizations such as the American Legion, Jonesboro Jaycees and their empty stocking fund, the Senoia Masonic Lodge #82, the Fayette Shrine Club and the Atlanta Yaarab Temple; where he served under several Potentates, Housing Director for 14 years, Commandant of the Cadillacs and Marshall for Potentate Chuck Pittman. For his work with the Shrine Jim was awarded Merit award number 339. Jim was loved and respected, and will always be remembered for his smile, honesty, dry humor, loyalty, sincere faith, and wearing a Stetson and Cowboy Boots everywhere he went. So, with heavy hearts we tip our hat as the cowboy rides away. The memorial service celebrating Jim's life is Sunday, September 12, 2021 at 2:00 PM at Cokes Chapel United Methodist Church, 4096 Lower Fayetteville Road,Sharpsburg, GA 30277. A Celebration of Life Reception will immediately follow the service at, Due South, 302 Clover Reach, Peachtree City, GA 30269. In leu of flowers, the family asks that memorial contributions be made in Jim's name to Shriners Children's Hospital - Greenville https://donate.lovetotherescue.org/give/119312/#!/donation/checkout?tm_source=shrinerschildrens&utm_medium=referral&utm_content=donateheader&utm_campaign=shrinerschildrens&c_src=shrinerschildrens&c_src2=header or to Sacred Journey Hospice Foundation https://www.sacredjourneyhospicefoundation.com/donate Condolences may be expressed to the family online at www.mckoon.com. McKoon Funeral Home & Crematory 770-253-4580

The family of James Howard McCool created this Life Tributes page to make it easy to share your memories.

Send flowers to the McCool family.