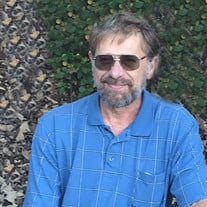 James "Randy" Schierbaum, age 58, passed away peacefully on Tuesday, November 9, 2021, at his home in Newnan, surrounded by his family. He was born in Mobile, AL to Chester Lee Schierbaum and Ellon Seals Schierbaum in the Fall of 1962. Randy is preceded in death by his mother, Ellon Seals Schierbaum. He is survived by his wife, Donna Smith Schierbaum; father, Chester Lee Schierbaum; children, Christin Smith and her husband Tony, Christina Cox and her husband Chris, Adrianna Pate and her husband Cole, Rebecca Duevall and her husband Jerald. He is also survived by eight grandchildren, Ethan Smith, Madelyn Smith, Greyson Smith, Caleb Cox, Carly Cox, Jackson Pate, Hannah Pate, Luke Duevall; sister, Debbie Claudio and her husband Michael; nieces, Emma, Hannah and one nephew, Daniel. Randy had a brilliant mind for mechanics and a life-long fascination with engines and machinery. After graduating from the Alabama Aviation and Technical College in Mobile, he began his career in the aviation industry, servicing planes at regional airports in Mobile, AL and Pascagoula, MS. In 1988, Delta Airlines invited him to join their mechanics team at the Hartsfield-Jackson Atlanta International Airport, where Delta is headquartered. For the next 33 years, he dedicated his career to the safety of Delta passengers and flight crew. Once, while at a Louisiana airport, waiting to fly home from a visit with his daughter, the pilot told the passengers there was a mechanical issue and to expect a long delay. Randy asked for permission to talk to the pilot, told him he was with Delta and knew the plane very well. The pilot gave him permission to take a look. Randy did the needed repair, saving everyone hours. As the plane lifted off, all on board applauded the work of the "Redneck Genius." Randy loved his family, from his parents and sister's family to his beautiful wife (who is happy he now gets to see all of the stars and galaxies that amaze him) and four daughters and their families. As their father, he kept everyone in church, joining what is now UpChurch in its humble beginnings in the 80's. His family recently started attending TriCounty Baptist Church in Senoia, GA. He always loved a busy home. The more children and grandchildren, the better. As his parents aged, he was supportive and cheerful with them as long as he could be, sadly losing his mother earlier this year. Randy's hobbies included working with his father on a bold engine prototype, playing with his grandchildren, telling stories that made people laugh, tinkering in his workshop, and doing his best to keep the downstairs bathroom from self-destructing. And he loved Southern Rock. Always. His life was a life of compassion for the down and out. He understood the struggles of the hurting as he struggled too. But his journey ended with a Win. "Don't cry for me, for I have no fear. All my pain is gone, and Jesus took my tears. Don't cry for me. This is not the end. I'll be waiting here for you when we meet again." The visitation and funeral service will be held at TriCounty Baptist Church, 5445 Ga-16, Senoia, GA, 30276, on Saturday, November 13th, with Visitation starting at 12:30 pm and the Service beginning at 2:00 pm. Pastor Doug Anderson will be the officiant. Randy will be laid to rest on Monday, November 15th, at Center Hill Baptist Church Cemetery in Lithonia, GA. Condolences may be expressed to the family online at www.mckoon.com. McKoon Funeral Home & Crematory (770-253-4580

James "Randy" Schierbaum, age 58, passed away peacefully on Tuesday, November 9, 2021, at his home in Newnan, surrounded by his family. He was born in Mobile, AL to Chester Lee Schierbaum and Ellon Seals Schierbaum in the Fall of 1962. Randy... View Obituary & Service Information

The family of James Randy Schierbaum created this Life Tributes page to make it easy to share your memories.

Send flowers to the Schierbaum family.