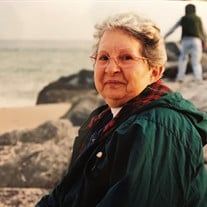 Janet Rose Kennamer Thomas, known by her adoring grandkids and greatgrandkids as "Butter," passed away on January 9, 2022. Janet was born on October 13, 1935, in Woodville, Alabama, to Julia Wilbourn Kennamer and Alfred Aubrey Kennamer. Janet married James Bruce Thomas on August 14, 1953, and was a loving wife to Bruce for 62 years. Janet was a devoted mother, grandmother, and greatgrandmother, and took great delight in spoiling her grandkids and greatgrandkids. She was appreciated by friends and family for her kindness, her easy laughter, her skill as a cook and baker, and her gift for growing beautiful flowers. She was a lifelong member of the Union Primitive Baptist Church of Woodville, Alabama. At the time of her passing, Janet lived in the Wedgewood Community at Wesley Woods in Newnan, Georgia, where she developed cherished friendships with staff and residents. Janet was preceded in death by her parents, her husband Bruce, and brothers Alfred Kennamer and Donald Kennamer. She is survived by daughters Teresa Thomas (John) Huelskoetter of Madison, Virginia, Becky Thomas (Gayle) Chestnut of Albuquerque, New Mexico, and Anita Thomas (Peter Ludlow) of Newnan, Georgia; by grandchildren Sarah Huelskoetter, Thomas Huelskoetter, Emma Huelskoetter, Andrew Huelskoetter, and Sally Carter (Joshua) Thomas; and by greatgrandsons Jackson Thomas and Cooper Thomas. Donations in her memory may be made to CurePSP (1216 Broadway, 2nd Floor, New York, NY 10001, (443) 578-5670, or www.psp.org), the Union Primitive Baptist Church (11400 County Road 30, Woodville, AL 35776), or the Woodville Union Cemetery (P.O. Box 26, Woodville AL 35776). A memorial service will be announced at a later date. Condolences may be expressed at www.mckoon.com. McKoon Funeral Home and Crematory (770) 253-4580

The family of Janet Rose Thomas created this Life Tributes page to make it easy to share your memories.

Janet Rose Kennamer Thomas, known by her adoring grandkids and...

Send flowers to the Thomas family.