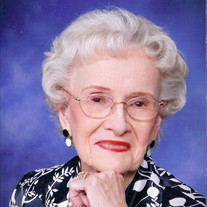 JoAnn Lewis Wallace, 96, formally of Stillwater, OK., passed away on Friday, October 23, 2020, in Newnan, GA. She is survived by her husband of 73 years, Billy Wallace of Newnan, GA., and her four children: Carol (Rich) Johnstone of Walnut Creek, CA., Debbie Blossom of Oklahoma City, OK., Wendy (Paul) Kooser of Sorrento, FL., and Brian (Carrie) Wallace of Newnan, GA., five grandchildren and two great-grandchildren. “Aunt Jo” also leaves behind 12 nieces and nephews and friends made throughout her long life. She was preceded in death by her parents, Stuart and Ann Lewis, two brothers who died before she was born, her stepmother Cornelia Jean Lewis, and her half-brother Richard “Dick” Lewis. Born in Burlington Junction, MO., on July 2, 1924, JoAnn finished high school in Columbia, SC., where her father was stationed at Fort Jackson, and where she was honored for her English essays and compositions. After high school she moved to Atlanta, GA., with her parents where her father was stationed at Ft. McPherson. She attended Oglethorpe University and was on the college newspaper staff. She married Ensign Billy C. Wallace on April 14, 1947, in the chapel at Emory University in Atlanta. A devoted military wife for 22 years, she moved across the country six times and lived overseas twice, on the island of Saipan and in the Panama Canal Zone, as her husband’s military service took him around the country and world. The family moved to Stillwater, OK., in 1969 after Billy retired from the Navy and began working at Oklahoma State University (OSU). In Stillwater she was a member of First Baptist Church where she taught second and third grade Sunday School and Bible School for several years. She was treasurer of the Rotary Wives Club for several years and helped with the Stillwater Public Schools hearing test program. Once Billy retired from OSU, she enjoyed traveling with him and visiting their children, grandchildren and friends. After 48 years in Stillwater, she and Billy moved to Newnan, GA., in 2017 to live close to their son and his family. Having been the daughter of an Army colonel and married to a career Navy officer, she embraced patriotism and enjoyed the military life. She also enjoyed OSU Cowboy and Cowgirl basketball and followed the games each year. JoAnn had fond memories of playing basketball in junior and senior high school. She loved music, played piano by ear and was a member of Kappa Delta Sorority and the Daughters of the American Revolution. She loved children and was a proud mother, grandmother and great-grandmother. If wishing to honor her, friends are encouraged to contact the Oklahoma State University Foundation and make a donation in her memory to the Friends of Music program. Condolences may be expressed to the family online at www.mckoon.com. McKoon Funeral Home & Crematory 770-253-4580

JoAnn Lewis Wallace, 96, formally of Stillwater, OK., passed away on Friday, October 23, 2020, in Newnan, GA. She is survived by her husband of 73 years, Billy Wallace of Newnan, GA., and her four children: Carol (Rich) Johnstone of Walnut Creek,... View Obituary & Service Information

The family of JoAnn Elizabeth Wallace created this Life Tributes page to make it easy to share your memories.

Send flowers to the Wallace family.