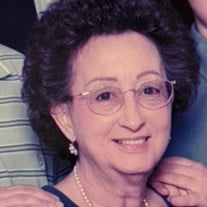 Joann Ward Wiggins, age 86, went home to be with her Lord in the early morning hours on Monday, June 20, 2022, at Piedmont Newnan Hospital surrounded by her family. She was born on January 19, 1936, to the late Robert Guy Ward, Sr. and Nelle Wilson Ward. Joann was a loving and devoted wife, mother, grandmother, sister and aunt who was very loved and will be greatly missed. She enjoyed trips to the beach and spending time with her family and friends. Joann graduated from Newnan High School, class of 1952, at the age of 16 and went on to attend business college in Atlanta. After college, she began to work as a secretary at General Motors. She worked at Fischer Insurance as a secretary after returning to Newnan. She continued her secretarial work at the Coweta County Tax Assessor's Office until she retired. Joann will be missed by all who knew and loved her. Along with her parents, Joann is preceded in death by her son Joseph Michael Youngblood. She is survived by her husband Charles Wiggins; son, Donald Robert Youngblood and his wife Valerie; stepdaughter, Lisa Schultz; grandchildren, Dillon Youngblood, Dalton Youngblood, Adam Brennan, Tyler Brennan and great grandchildren, Palmer James Youngblood and Everleigh Youngblood. She is also survived by her brother, Robert Guy Ward, Jr. and his wife Alice; nieces, Leigh Morgan (Greg), Alyson Atkins (David); nephew, Guy Ward (Michelle) and a long list of great nieces, nephews and extended family who will dearly miss her. The funeral service celebrating Joann's life is Thursday, June 23, 2022, at 11:00 AM in the chapel of McKoon Funeral Home, 38 Jackson Street, in Newnan with Dr. Ken Norton officiating. Burial will follow the service at Oak Hill Cemetery. The family will receive friends on Wednesday evening from 6:00 PM until 8:00 PM at McKoon Funeral Home. Condolences may be expressed to the family online at www.mckoon.com. McKoon Funeral Home & Crematory 770-253-4580

Joann Ward Wiggins, age 86, went home to be with her Lord in the early morning hours on Monday, June 20, 2022, at Piedmont Newnan Hospital surrounded by her family. She was born on January 19, 1936, to the late Robert Guy Ward, Sr. and Nelle... View Obituary & Service Information

The family of Joann Ward Wiggins created this Life Tributes page to make it easy to share your memories.

Send flowers to the Wiggins family.