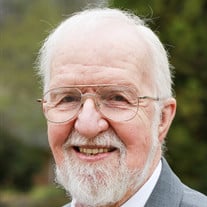 John F. Caldwell, Jr. Obituary February 22, 1934 - November 4, 2021 On November 4th, the great heart of a servant of Christ stopped, and John Franklin Caldwell, Jr. transitioned from the loving arms of his wife Syble at home to the saving arms of his Lord and Savior in his eternal home. He was 87 years old. Born in a house on LaGrange Street in Newnan where his parents were living in 1934, "Johnny" (as he was known) grew up in Newnan, and the family was later joined by another brother, Bobby. Johnny had red hair and spent his time like most boys during the Depression, playing outside, riding bikes, fishing in local ponds, and watching movies in town on Saturday. In 1952, Johnny was a member of the first Newnan High School class to graduate from the new NHS building on LaGrange Street. He played the clarinet in band well enough to earn a music scholarship (and briefly considered a career in music), then enrolled at the Georgia Institute of Technology to study industrial engineering. He was in the Cooperative Education program at Georgia Tech, which allowed him to alternate quarters on campus with quarters working while earning his degree. John met and fell in love with Ann Elizabeth Derseweh, a Nashville native, while they both attended the Druid Hills Church of Christ on Ponce de Leon in Atlanta. He proposed in Nashville as he neared graduation, where they were later married. John was drafted into the Army in 1957, and he and Ann lived in Andover, Massachusetts - and their son John III was born in nearby Lawrence - and they also lived in Milwaukee, Wisconsin, and in Huntsville, Alabama - where their daughter Mary Caroline was born. In Huntsville, while in the Army Reserve, John worked for Brown Engineering on the Apollo program's Saturn V subcontract with NASA at Redstone Arsenal. Years later he was overheard introducing himself as a real-life "Rocket Scientist." In 1968, John took a job at the William L. Bonnell Company as an industrial engineer, and he brought his family back to Newnan, Georgia. He became a member of the Kiwanis Club, sent his children to art lessons with Tom Powers (the founder of Powers' Crossroads Country Fair and Art Festival), and became a deacon and then an elder in the Newnan Church of Christ. He also took his family on many memorable camping trips to historical sites all around the South. In 1976, the Board of Coweta Festivals, Inc. hired John to become the official freelance photographer of Powers' Crossroads - a job he held for 11 years - as the annual Labor Day festival became a major tourist attraction. An exhibit celebrating the 50th Anniversary of Powers' Crossroads and featuring John's photography is currently open to the public at the Newnan-Coweta Historical Society's McRitchie-Hollis Museum. Also in 1976, like so many men in Newnan, John grew a full beard in honor of the United States Bicentennial Celebration. Calling it his "ugly cover," he never shaved it off. In the early 1980s, John earned his Ham Radio license and soon earned the call sign N4HIC. In 1988, he trained his wife, son, daughter, and son-in-law in Morse code, and they also earned their ham licenses. He was a proud member of the Bill Gremillion Memorial Radio Club in Newnan for nearly 50 years. John was a spiritual leader of his family and his church, and in 1995 he and Ann were among the founding families of the Downtown Church of Christ in Newnan. He studied the Bible with many individuals after being baptized into Christ in his 20s, and he baptized his own grandson, Joseph. He was also a song-leader and member of several religious and community choruses over the years, with a truly impressive bass voice. John was a devoted husband and father, and he cared for his wife Ann during her nearly 40-year fight with multiple sclerosis, until her death in 2012. In 2018, John married Syble Harris, and they enjoyed their years together entertaining family and friends, going to church, working on jigsaw puzzles, watching college football and the Braves, and vacationing on Gulf beaches. John Caldwell was preceded in death by his parents John Caldwell, Sr. and Dorothy Stripling Caldwell, his brother Robert Wesley Caldwell, Sr., his wife Ann Elizabeth Derseweh Caldwell, and a grandson, Aaron John Moore. He is survived by his wife Syble Harris, his son John Caldwell III, his daughter Mary Caroline Moore (Russ), four grandchildren - Joseph Moore, Lauren Caldwell Searcy (Josh), Emily Moore Weiss (Freddie), and Ann Elizabeth Moore, and three great-grandchildren - Kadi and Jace Searcy, and Lanie Weiss. The family will host a visitation at McKoon's Funeral Home in Newnan on Saturday, November 6 from 6-8 pm, followed by a funeral service at McKoon's Chapel on Sunday, November 7, 2021, at 4 pm. Interment will be at Forest Lawn Memorial Park in Newnan. In lieu of flowers, please send memorial gifts to the Churches of Christ Disaster Relief Effort in Nashville (disasterreliefeffort.org) or the Shepherd Center in Atlanta (www.shepherd.org). McKoon Funeral Home and Crematory 770-253-4580.

John F. Caldwell, Jr. Obituary February 22, 1934 - November 4, 2021 On November 4th, the great heart of a servant of Christ stopped, and John Franklin Caldwell, Jr. transitioned from the loving arms of his wife Syble at home to the saving arms... View Obituary & Service Information

The family of John Franklin Caldwell, Jr. created this Life Tributes page to make it easy to share your memories.