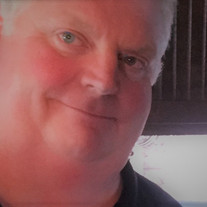 John Holt Southerland, 53, of Newnan, Ga. passed unexpectedly on December 15, 2021 from this earthly life into eternity to the place his Heavenly Father prepared for him. He is pre deceased by both his mother, Mary Southerland, and his father, Richard Southerland, as well as his most beloved son Eric Southerland who passed in 2011. John Holt leaves behind his ex-wife, best friend, and dearest companion of 36 years Lisa S. Regan as well as her husband CL and his children Corbin and Kourtni. "Uncle John" is also survived by Lisa's daughter, Haley Lavell, her husband Ricky and their children McKenzie (Bug) and Bryson. In Lisa's family John Holt also leaves a brother (in law) Jerimy Stanley behind as well as his 'second mother' (in law) Diana Rice and her husband James. His sister (in law) Jeni Foreman passed 3 years ago. His father (in law) Lonnie Stanley died unexpectedly in 1991. John Holt served honorably in the United States Navy for 6 years honorably discharging as a Petty Officer 2nd class. He was stationed in Norfolk, Va. on the USS Vulcan; he was a machinist mate and proudly worked with his hands on Americas naval fleet traveling across the world and serving in Operation Desert Storm. He was a semi truck driver for J.B. Hunt for over 25 years and loved his job as well as his many friends and co workers at the terminal for which he worked outside of Newnan. He was slated to retire in January of next year from his career in order to pursue a new chapter in his life; he would have celebrated his 54th birthday on January 29th. John Holt was an avid carpenter who enjoyed home improvement and projects of the like. He received much joy using his carpentry skills to help others and was actively a supporter of 'Habitat for Humanity' for which he gave his time and talents to creating beautiful, safe homes for needy families. He was an eclectic soul with a quiet, almost stoic, exterior. His friends and family knew him though as a funny and extremely intelligent man with a huge caring heart and love for those closest to him. His generosity and selflessness are also a huge part of his legacy, and his footprint in this world will not soon be forgotten. Please join his family and friends as they gather to celebrate the life of this gentle giant. Pastor Jeffery Mitchell will lead the service with words from his family and friends as well. Services will be held Saturday, January 8, 2022, at McKoon Funeral Home, 38 Jackson Street in Newnan, Ga. Visitation will begin at 3 PM with photos and memorabilia celebrating his life and the service celebration of life will begin at 4 PM. Condolences may be expressed to the family online at www.mckoon.com. McKoon Funeral Home & Crematory 770-253-4580

John Holt Southerland, 53, of Newnan, Ga. passed unexpectedly on December 15, 2021 from this earthly life into eternity to the place his Heavenly Father prepared for him. He is pre deceased by both his mother, Mary Southerland, and his father,... View Obituary & Service Information

The family of John Holt Southerland created this Life Tributes page to make it easy to share your memories.

Send flowers to the Southerland family.