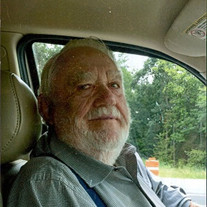 J.C.Hunter Jr., 90, of Moreland, Georgia, passed away on Sunday, August 15th at Piedmont Newnan Hospital. He was born in Coweta County on January 22, 1931, and was the only child of the late Cecil Hunter and Margaret Thompson Hunter. J.C. loved God, his family, and his country. He joined White Oak Presbyterian Church on August 15th, 1943. He was a member for exactly 78 years. At White Oak Church, J.C. was an active member of the Young People's Christian Union. It was during his time in YPCU that he met his future wife, Shirley Stamps, who was also an active member. It is here that they began their courtship. J.C. and Shirley married in 1952 and together had four children: Buster, Meg, Jeff and Shelby. Together they enjoyed 69 wonderful years of marriage. J.C. was a proud member of the United States Army and was stationed in Kaiserslautern, Germany for two years. During their time in Germany, J.C. and Shirley developed a love for traveling. They traveled throughout Europe during this time and have since taken many wonderful trips throughout the world. Over the years their travels have taken them to 43 of the U.S. states, 96 different countries (some more than once), and to all seven continents. J.C. was loved very much by his family and friends. He was known to be quite the "character". His love of telling jokes and goodhearted teasing would always put a smile on your face. You were never quite sure what was going to happen next. He enjoyed many things after his retirement from The K-Mart Distribution Center. J.C. was a faithful Braves fan, watching every game on TV. He also enjoyed selling his homegrown vegetables at the Farmers Market in Newnan. He and Shirley would sell vegetables, homemade canned goods, and flowers that she grew. He never met a stranger there, or anywhere for that matter. He loved socializing with new and old friends. J.C. is survived by his wife, Shirley Hunter of Moreland; children, Buster Hunter, Meg Hall (Jim), Jeff Hunter (Janet), and Shelby Miller (Clay); grandchildren, Jonathan Hall (Mandi), Joanna Hall Robertson (Beau), Matt Miller (Kayla), Chase Hunter, and Andrew Hunter; great-grandchildren, Jaden Hall, Brayden Robertson, Brooks Robertson, Elsie Robertson, Grayson Miller, and Luke Miller. Visitation will be at McKoon Funeral Home on Tuesday, August 24th from 6:00 p.m. until 8:00 p.m. The funeral service will be on Wednesday, August 25th at 3:00 p.m. at White Oak Hall at White Oak ARP Church with Reverend Winston Skinner and Reverend John Cook officiating. Interment will be at the White Oak ARP Church cemetery. Condolences may be expressed to the family at www.mckoon.com Flowers are welcomed or contributions can be made to the White Oak ARP Church Building Fund (2796 Gordon Road, Senoia, GA 30276). McKoon Funeral Home & Crematory (770) 253-4580

J.C.Hunter Jr., 90, of Moreland, Georgia, passed away on Sunday, August 15th at Piedmont Newnan Hospital. He was born in Coweta County on January 22, 1931, and was the only child of the late Cecil Hunter and Margaret Thompson Hunter. J.C. loved... View Obituary & Service Information

The family of John "J.C." Cecil Hunter, Jr. created this Life Tributes page to make it easy to share your memories.

Send flowers to the Hunter family.